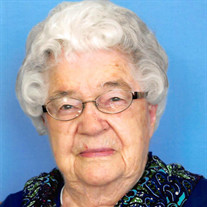 Winifred (Ash Degner) Clambey, a lifelong resident of the Wendell and Fergus Falls area, died at Park Gardens on January 9, 2019, at the age of 101. The daughter of Walter and Della Ash, Winifred grew up on the family farm west of Wendell. Her favorite horse was “You Know”. Winifred, called Winnie by many, attended a country school close to the family farm and later graduated from Fergus Falls High School. She than attended college in Hibbing, MN. After earning an associate degree, she moved to the Twin Cities and worked as a secretary at the state capital. During one visit home, she attended a baseball game in Wendell and ended up nurturing a man who had been hit in the eye by a ball. His name: Walter Degner, and a long-term relationship ensued. On January 29, 1944, she married Walter and together, they bought a farm by Wendell and attended Lawrence Presbyterian Church. When Walter and Winifred learned they couldn’t give birth to biological children, they turned to adoption. On July 14, 1953, they adopted two young, school age children, who had lived three plus years in an orphanage in Duluth, MN: a seven-year-old boy, Terry, and a six-year-old girl, Jean. Immersed within a loving household and the soul modeling community of Lawrence Township, the children flourished, and the orphan years melted into the past. In 1967, Walter, who had Type 1 Diabetes, passed away and Winifred left the farm and returned to the world of education. She worked as a librarian at the Jr. College in Fergus Falls and returned to college. In 1972, she graduated from Moorhead State with a Bachelor of Arts in Library Science and she continued with her work in library services. On June 9, 1990, Winifred married Kenneth Clambey at the Federated Church in Fergus and with that, she returned once more to farm life. Besides household chores, her activities included garden work and beekeeping. In 2010, Ken and Winnie moved from the farm to the Park Gardens Assisted Living Center. In December of 2011 Ken passed and Winnie continued to live at Park Gardens until her passing on the night of January 9, 2019. She was preceded in death by her parents; sisters, Evelyn, Florence, and Edna. Survivors include Winnie’s son, Terry and his daughters Nicole Amber, Tara Amber, and Amber Renay and her husband Matt. Terry’s grandchildren include, Madison, Mason, Talya, Braylon, Elliot, Moriya, Noah, Isaiah, and Zachery; daughter, Jean (Dwaine) and their children, Angie, Craig, and Ryan and spouses, the grandchildren include Caitlan, Drew, Rylee, Genavie, Cally, Tristan, Malea, Macie, and a great-great granddaughter (Caitlan and her husband Kyle’s daughter) Crosby; sister Alice (Bud) Gehrke. Ken’s family welcomed Winnie as a member, and survivors include Gary(Susan) and Kathy (Greg) Truax, along with their children and grandchildren. Visitation: One hour prior to the service at the church. Service: 11 a.m., Saturday, January 19, 2019 at The Federated Church in Fergus Falls Clergy: Reverend Doug Dent Interment: Lawrence Presbyterian Cemetery, Wendell, MN Olson Funeral Home in Fergus Falls is in charge of the arrangements. Condolences may be sent online at www.olsonfuneralhome.com

Winifred (Ash Degner) Clambey, a lifelong resident of the Wendell and Fergus Falls area, died at Park Gardens on January 9, 2019, at the age of 101. The daughter of Walter and Della Ash, Winifred grew up on the family farm west of Wendell.... View Obituary & Service Information

The family of Winifred Irene Degner Clambey created this Life Tributes page to make it easy to share your memories.

Winifred (Ash Degner) Clambey, a lifelong resident of the Wendell...