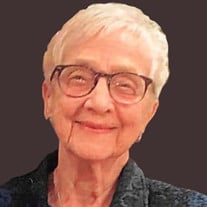 Wilma Carlsrud left this earth to join her Lord and ancestoral family on September 10, 2018. She died at her home on West Battle Lake, where she loved and enjoyed God’s gifts of nature each and every day. Wilma Carol was born on May 26,1925 to Henry and Inga (Seem) Warner in Fergus Falls, Minnesota. Wilma and her twin brother, William Charles, were not expected to live. They were baptized in the hospital where William died several hours later. Wilma was confirmed in 1938 at Trinity Lutheran Church in Fergus Falls. She attended school at District #9 east of Dalton. After graduating in 1943 from Rothsay High School, Wilma was employed as a telephone operator. On Dec. 4, 1943, Wilma married Donald R. Carlsrud at Hamar Lutheran Church parsonage in Rothsay, MN. The couple lived in Rothsay until 1955 when they moved to Wolverton where Wilma worked as a waitress. After living on a farm outside of Wolverton, the family moved to Breckenridge, MN in 1962. Wilma worked as an assistant at Dr. Charles Krassin Optometry for many years. After dividing time between Wahpeton, ND and Jewett Lake for a few years, Don & Wilma lived at Jewett Lake year round. In 1990, they moved in to Fergus Falls, where Wilma lived until joining her daughter and son-in-law on West Battle Lake in 2015. She was a member of Bethlehem Lutheran Church. She was formerly a member of Hamar Lutheran where she taught Sunday School. Wilma was also active in her churches while living in Wolverton and Breckenridge. She was a member of a birthday club and was an active member of the DAV Auxiliary where she served as chaplain. She was also a volunteer for the Minnesota Veterans Home. The most precious part of Wilma’s life was being a wife, mother, grandmother and friend. Wilma & Don loved to dance and did so several times a week. It was a joy for them to have family around them and to entertain family and friends at their Jewett Lake home. Wilma was preceded in death by her husband, Don in 2002, her parents, her twin brother, William Charles, sisters, Esther Opsal, Helen Comstock and Ruth Miller. Wilma’s family includes her children, David (Susie) Carlsrud, Valley City, ND, Ronald (Nancy) Carlsrud, Flandreau, SD and Deborah (Warren Ketterling) Carlsrud, Battle Lake, MN; grandchildren, Michael Carlsrud, Breckenridge, MN, Sarah (Bill) Buchholz, Springdale, AK and Jacob Carlsrud, Minneapolis; step grand children, Sherri (Wayne) Smith, Sparks, NV, Cory Borg, Valley City, Kelli (Adam) Haan, Coon Rapids, MN, and Amy Ketterling, Minneapolis; great grandchildren, Joseph & Nicholas Buchholz, Landon Carlsrud; step great grandchildren, Tanner & Teegan Smith; sister Eleanor Michelson of Buffalo Lake MN, as well as many nieces and nephews. Memorial Service: 1:30 p.m. Thursday, September 13, 2018, at the Olson Funeral Home Clergy: Rev. Brad Skogen Interment: Hamar Cemetery, Rothsay Olson Funeral Home, Fergus Falls is in charge of arrangements online condolences may be sent to www.olsonfuneralhome.com

Wilma Carlsrud left this earth to join her Lord and ancestoral family on September 10, 2018. She died at her home on West Battle Lake, where she loved and enjoyed God&#8217;s gifts of nature each and every day. Wilma Carol was born on May... View Obituary & Service Information

The family of Wilma Carol Carlsrud created this Life Tributes page to make it easy to share your memories.

Wilma Carlsrud left this earth to join her Lord and ancestoral...