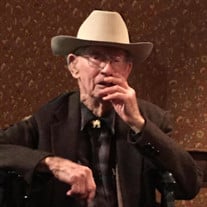 William Henry Watkins, 93, of Fergus Falls, died Saturday, July 4, 2020, at Park Gardens in Fergus Falls. Bill was born February 8, 1927, in Florala, Alabama to Norman and Fannie (Spears) Watkins. He attended school in Atlanta, Texas and graduated from Atlanta High School in 1944. He joined the Army upon turning 18 in early 1945, and was training to be sent to the Pacific when WWII ended in August 1945. Transferred to the Army Air Corps, the forerunner of the Air Force, he served at bases in Hawaii, the Philippines, Japan, Colorado, Alaska, Washington, Kansas, back to Alaska, North Dakota and England. For his work as a squadron First Sergeant he received the Air Force Commendation Medal. Retiring in 1975 as a Senior Master Sergeant, after 30 years of service, he settled in Fergus Falls where he operated a furniture stripping business. While stationed in Colorado, Bill met Helen Hokenson, whom he married on April 12, 1953, at her home in Chisago City, MN. In 1956, with 15-month old Billy, they tent-camped for 3000 miles from Denver to Fairbanks, Alaska, almost half of it on the gravel Alcan highway. Three years later they drove back with David and Elizabeth. In their second tour of Alaska, the family was deeply involved in scouting. Bill was the scout master of his sons' troop and was honored with initiation into Wood Badge. He was an avid reader of history; this interest led to his passion for collecting old tools, in particular carpenter planes. As an active tool collector, he and Helen travelled throughout the United States to tool meetings. A 240-year old plane from his collection (https://photos.app.goo.gl/A8VYWbNRdxLKHq7R6) was donated to the Mt. Vernon museum as an example of what George Washington would have used in his time. Bill was a member of the Masons for over 70 years, joining Atlanta (Texas) Lodge No. 463, Fergus Falls Cornerstone Lodge No. 99, and Palestine Commandery No. 14. He was also a member of the Mid West Tool Collectors Association, Otter Tail County Historical Society, and First Lutheran Church of Fergus Falls. He was preceded in death by his parents, Norman and Fannie, brothers Charles and John, and son David. Bill is survived by his wife Helen of Fergus Falls; children: William (Chenghui) Watkins of Baltimore, MD, and Elizabeth (Tom Huberty) Watkins of Minneapolis; daughter-in-law Jeanne Watkins of Fargo; grandchildren: Ruth Anne Watkins of Baltimore, Emma Wu Watkins of New Haven, CT, and Rajean (Kelly) Erbar of St. Louis, MO; sisters: Catherine Brown of Fort Worth and Mabel (Harold) Oliver of Alma, AR; sisters-in-law Suzie Watkins and Veda Watkins of Atlanta, TX; and numerous other kinfolk in the South. In lieu of flowers please send memorials to the Mid West Tool Collectors Scholarship Fund (https://mwtca.org/join-renew-donate/endowment-or-donate/general-giving/), the Otter Tail County Historical Society (http://www.otchs.org/), Friends of the Fergus Falls Public Library (https://www.ffpubliclibrary.org/friends-of-the-library.html), or LB Hospice (https://www.lbhomes.org/give). Service: 3:00 p.m., Tuesday, July 7, 2020, at the Olson Funeral Home Chapel in Fergus Falls, MN. The service will be livestreamed and available for later viewing at www.olsonfuneralhome.com Clergy: Reverend Terry Tilton Interment: Fort Snelling National Cemetery, Minneapolis, Minnesota Arrangements are provided by the Olson Funeral Home in Fergus Falls. Online condolences may be sent to www.olsonfuneralhome.com

The family of William Watkins created this Life Tributes page to make it easy to share your memories.