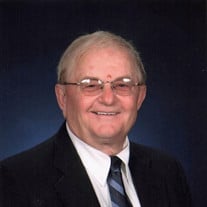 William Eugene Rose, 87, died Thursday, January 7, 2021, at his home. William was born November 12, 1933, in rural Wimbledon, ND, to John and Susan (Bultema) Rose. He attended country school and graduated from Wimbledon High School in 1951. William furthered his education by attending Ellendale State Teachers College and earned a B.S. degree in education in 1957. He served two years in the US Army in Fort Gordon, GA. On June 24, 1956, William married Darlene Ann Kristianson in Coteau, ND. William was a teacher in Rugby, ND in 1958; he then taught in Courtenay, ND from 1959 – 1963; in Strandquist, MN from 1963 - 1966 and in Rothsay, MN from 1966 until he retired. He taught Driver’s Education for 51 years. Bill coached basketball for 28 years and earned many honors during those years. He also coached other sports including baseball, high school track, and assistant girls’ volleyball coach. Bill was honored to be awarded the Minnesota State High School Association Hall of Fame Award in 1998. However, his greatest honor was when the Rothsay Public School dedicated their new gymnasium in his honor, Bill Rose Gymnasium, and established the Bill and Darlene Rose Scholarship. In addition to coaching, William enjoyed reading, golfing, watching sports and playing cards. He was a member of the New Life Lutheran Church, Lions Club, American Legion, and a volunteer with the Rothsay Fire Department. Bill was a pillar at Rothsay High School. He taught and coached nearly every student during his thirty years. And every student was made to feel special as Mr. Rose stood in the hallway outside his classroom door every morning with a friendly smile and greeting for each student. Mr. Rose held his athletes to a high standard. The players quickly learned that character and sportsmanship were more important than their performances. Winning meant following the rules, good sportsmanship, team play, and respect for your teammates, your opponents, and yourself. And that approach brought many victories. Bill made teaching at RHS a great experience. Everyone who had the pleasure of being a colleague will remember Bill’s motto: “If you ain’t Dutch, you ain’t much.” Bill was a “people person.” He loved to travel and he loved to meet people, and he always wanted to know where everyone was from and something about their lives. He will be remembered as one of the great ones. He was preceded in death by his parents, John and Susan Rose; grandparents; sisters, Jean (Harold) Falk, Kathleen (Lowell) Wright; brother, Jack (Lois); father-in-law and mother-in-law, Helmer and Sadie Kristianson; step mother-in-law, Olga Carlson and brothers-in-law, Lauren (Susan) Kristianson and Larry Kristianson. William is survived by his wife of 64 years, Darlene; children, Tad (Myrna), Timothy (Marcia), Teri (Mitch) Center, Tamera Snodgrass and Toni Rose; grandchildren, Amanda Center Chung (Jack), Alec Center (Kelsey), Anna Center, Sadie Snodgrass (fiancé David), John Henry Snodgrass, Amelia Snodgrass, Tyrell (Ericka) Rose, Michael Rose, and Travis Bladow; step-grandchildren, Tom (Wendy) Nelson, Larry Nelson, Kay Tuttle, Jeanette Nelson, Janelle (William Jr.) Seedorf; great-grandchildren, Arwen, Carys, Kai Chung, Carter and Brooklyn Rose, step-grandchildren, Jacob, Dan, Seth, Becca, Brandon, Austin, Megan, Braden, Aubry, Rhyker, Ava and Adlynn; sisters-in-law, Karen (Harvey) Schneider, Cheryl Thom Schmid, Maxine (Mark) Peterson, and numerous nieces and nephews. A private family service will be held. Please refer to his tribute wall for a recording of the service. A public Celebration of Life will be held at a later date. In lieu of flowers memorials preferred to the Bill and Darlene Rose Scholarship Fund or charity of donor’s choice. Clergy: Reverend Randy Whitehead Interment: Hamar Cemetery, Rothsay, MN Arrangements provided by the Olson Funeral Home Online condolences may be sent to www.olsonfuneralhome.com

The family of William E. Rose created this Life Tributes page to make it easy to share your memories.