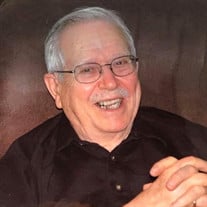 William Leroy Raaen, 94, a resident of Fergus Falls, Minnesota, died peacefully at Pioneer Care on Friday, June 22, 2018. He was born on October 1, 1923, in Winger, Minnesota, the son of Ragna (Snustad) and Oscar Raaen.   Mr. Raaen began his education in a one-room country schoolhouse where he was fortunate to have several excellent teachers. When he was thirteen his mother died due to complications from tuberculosis. His eldest sister, Meredith, moved back to the farm to look after her siblings following her graduation from Oak Grove High School. Bill attended high school in McIntosh, Minnesota where he developed a passion for sports and music, playing tuba in the high school band. Following high school, he attended college for a little over a year before being drafted into the United States Army. When his training was completed he was shipped to France where he served in the medical corps. After spending three years in the Army Bill obtained his GI Bill and attended Concordia College. At Concordia, Bill met and married Geraldine Fossen, his wife of over 60 years until her death in 2010. Following graduation from Concordia, Bill and Gerrie taught in Leonard, North Dakota for two years before moving to Maddock. Bill spent eight years in Maddock, North Dakota where he was the school principal, an English and French teacher, and the founder of a band and choral music program. In 1957 Bill was awarded a John Hay Whitney Fellowship, so the family moved to New Haven, Connecticut where he studied at Yale University. Bill was also an original member of the International Peace Garden Music Camp board of directors. His students from Maddock were some of the first summer campers. In 1963 Bill accepted a teaching position at Fergus Falls High School as well as the position of choir director at Bethlehem Lutheran Church. While in Fergus Falls he served as president of the FFEA and was nominated for Minnesota Teacher of the Year. In addition, he held interim teaching positions at Hillcrest Academy. In 1983 Bill accepted a teaching position for a Department of Defense school on Clark Airforce Base in the Philippine Islands. In his three-year tenure there he and Gerrie traveled extensively to Thailand, Singapore, Japan, Korea and Australia. After completion of his assignment in the Philippines, Bill and Gerrie returned to Fergus Falls where Bill finished his teaching career. After retirement, Bill directed the Sons of Norway Choir, served as a chaperone for Hillcrest summer gospel teams, played tennis, canoed the Minnesota rivers, and was an ardent fan of his favorite sports teams. Survivors include his five sons, Joel and Kris Raaen of Faribault, MN, Paul and Beth Raaen of Greenwich, CT, Phil Raaen of St. Paul, MN, John "Jack" and Jacki Knapp-Raaen of Fargo, ND and Richard and Robbie Raaen of Andover, MN; 13 grandchildren and 9 great-grandchildren. Visitation: 5-7 p.m. Friday, July 20, 2018, at Olson Funeral Home Chapel in Fergus Falls, MN, and resumes one hour prior to the service at the church Service: 2 p.m. Saturday, July 21, 2018, at Bethlehem Lutheran Church in Fergus Falls, MN Clergy: Reverend Tom Peterson Interment: 12:45 p.m. Monday, July 23, 2018, at Fort Snelling National Cemetery, Minneapolis, MN Arrangements are provided by the Olson Funeral Home in Fergus Falls Online condolences may be sent to www.OlsonFuneralHome.com

The family of William L. Raaen created this Life Tributes page to make it easy to share your memories.