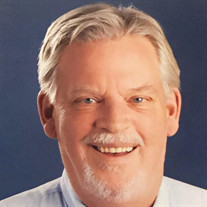 William “Bill” Frederic Henkes, 68, of Fergus Falls, died Thursday, July 30, 2020, at his home. William was born August 9, 1951, to Frederic and Laurel (Kohlhase) Henkes in Fergus Falls, MN. He attended McKinley Elementary School and graduated from Fergus Falls Senior High School in 1969. Bill enlisted in the Army and served from 1969-1971. He was a member of the Communication Corps, serving in Italy, Germany, Belgium, and Iran. He was employed with Otter Tail County as a Highway Civil Engineer for over 10 years. Later he was a Project Manager with Moore Engineering for over 10 years. Bill retired in 2013. In the summer of 1994, Bill met Kay Kochmann at Pickerel Lake. Bill and Kay dated for 10 years and on November 21, 2003, they were married in Fergus Falls and made their home on Jewett Lake. Bill was a member of the Eagles, Fergus Falls VFW, and the Fergus Falls American Legion. He loved to spend time at the lake with his family. He enjoyed golf and more golf. Preceding him in death were his parents, Frederic and Laurel Henkes; brothers, Mike and Dick; infant sister, Jane, and former spouse, Nancy Olson. Bill is survived by his wife, Kay; children, Nicholas (Alana) Henkes of New Hope and Molly Henkes of Grand Forks, ND; step-children, Kelsey Spanswick (Sheldon Hein) of Battle Lake and Nicholas (Jessica) Spanswick of Peoria, AZ; one grandson, Corben Spanswick; brother, Charles (Dawn) Henkes, and several nieces and nephews. Visitation: 5:00-7:00 p.m., Tuesday, August 4, 2020 at the Olson Funeral Home in Fergus Falls. Military Flag Presentation by the Fergus Falls V.F.W Post 612 and American Legion Post 30. Time of Sharing: 6:30 p.m., Tuesday, August 4, 2020 livestreamed at the Olson Funeral Home in Fergus Falls. Please refer to the Tribute Wall for a link to the live-stream. Arrangements are provided by the Olson Funeral Home in Fergus Falls. Online condolences may be sent to www.olsonfuneralhome.com

The family of William "Bill" Henkes created this Life Tributes page to make it easy to share your memories.