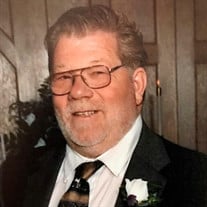 Wayne Leroy Tabbut, beloved father and long-time resident of Fergus Falls, Minnesota, died unexpectedly at his home on Wednesday, June 27, 2018. Wayne was 72 years old. Wayne was born on April 12, 1946 in Fargo, North Dakota to Quintin and Wilma (Askew) Tabbut. In 1965, he graduated from the special agriculture program at the University of Minnesota (Crookston). During his time in the program, he earned the Reserve Sweepstakes Award for his summer home project and an Erhard A. Anderson Horticulture Award. He also shared his unique sense of humor with the students and administration. After his graduation, he attended the Southern School of Agricultural in Waseca, Minnesota. In 1967, Wayne joined the United States Navy where he served as a Shipfitter, Petty Officer 3rd Class on the U.S.S. Mulphen. Wayne served until 1969, when he was released to inactive duty. Wayne served on reserve status until 1973. During his time in the Navy, Wayne was awarded the National Defense Service Medal. In 1970, Wayne married Nancy Ehrich and they had two children, Steven and Duane. After Wayne was discharged from the Navy, he returned to his family farm in Fergus Falls, Minnesota and helped his father with the farming operation. Quintin and Wayne ran a dairy farm until the late 1980s. At the same time, Wayne also farmed his own land. When Quintin retired from dairy farming, Wayne continued to farm and began driving semi-truck in the off-season. Wayne drove truck until he retired in 2008. Wayne never retired from farming, and his knowledge and passion lives on in the friends and neighbors that he assisted until his death. Wayne was passionate about farming and would enthusiastically educate people about how their food got from the farm to their table. He would emphatically point out that he was involved in most of that process since he grew the food, harvested it, and then trucked it across the country. He loved agriculture and his best days were when his sons were with him on the farm. In addition to farming, Wayne enjoyed dancing, driving around the block “to see what the neighbors were up to,” hunting, and having coffee with friends and family. Wayne is survived by his sons, Steven (Katie) Tabbut, Duane (Nicole) Tabbut; two brothers, Vern (Deb) Tabbut, Mark (Bob) Tabbut; four sisters, Marilyn (Gene) Fairchild, Elaine (Mark) Klicker, Joyce (Russ) Resler, and Liane (Rick) Kirmis; two grandchildren, Codie Tabbut and Brian Berg; numerous nieces and nephews and loyal friends. He was preceded in death by his parents, Quintin and Wilma; one niece, Erin Joy; and one great-niece, Trinity Love. Blessed Be the Memory of Wayne Tabbut. Visitation: 11:30 a.m. – 1 p.m. Tuesday, July 3, 2018, at The Federated Church in Fergus Falls Service: 1 p.m. Tuesday, July 3, 2018, at The Federated Church in Fergus Falls, MN Clergy: Rev. Dr. Ed Morgan Interment: Fort Snelling National Cemetery, Minneapolis, MN Arrangements are provided by Olson Funeral Home in Fergus Falls, MN Online condolences may be sent to www.OlsonFuneralHome.com

The family of Wayne Leroy Tabbut created this Life Tributes page to make it easy to share your memories.