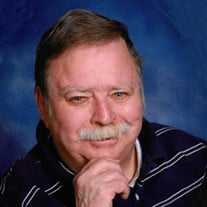 Wayne Estenson passed away peacefully of complications from pancreatic cancer at Lake Region Hospital on February 12, 2022, one day before his 77th birthday. He was preceded in death by his parents, Donald and Luella (Weiss) Estenson. He is survived by his brothers Steve (St. Paul, MN), Kurt (New Richmond, WI), and Lee (Key West, FL), Aunt and Uncle Marion and Robert Thompson, Aunt Betty Estenson, one niece and nephew, and many cousins. On February 13, 1945, Wayne was born at the Geo. B. Wright Memorial Hospital in Fergus Falls, MN. His family relocated several times over the next few years, but starting from the age of seven he was a life-long resident here. He had many challenges to confront early in life, suffering from every childhood disease there was. At age six, he was diagnosed with a fast-acting case of polio, the scourge of that era, but through treatment from the Sister Kenney Institute he recovered fully. He overcame educational difficulties through alternative programs, enabling him to complete grade school at Madison Elementary, attend Washington Junior High School, and graduate in 1965 from Fergus Falls High School, where he took great pride in his years as the Student Manager for basketball and football. With his mother’s help, he memorized driving laws and passed his permit exam orally, enabling him to obtain his driver’s license. This gave him the freedom and independence to live his life on his own terms. Growing up in the family businesses of a hotel and a restaurant helped Wayne develop a strong work ethic. His employment history included the laundry services at Lake Region Hospital and Thom Linen Service, later working at the Rendering Plant in Fergus and the Pal-O-Pack insulation plant in Underwood. He delivered “The Midweek” for many years. He developed his own lawn maintenance service and cared for the properties of many Fergus residents. When he worked for Bob Moore, he cared for and loved the horses there, often speaking of how he had a rapport with them and could sense when there was something wrong. He last worked in the kitchen at the Pizza Ranch before retiring. Wayne was a member of The First Lutheran Church, where he regularly attended services. For Wayne, the good life contained movies, music, and Dodge trucks. He loved watching westerns (John Wayne was a favorite), plus horror, science fiction, and action movies. He could tell you all the Frankenstein, Dracula, and Wolfman movies, the years they were made, and who starred in them. His favorite movie star was Sandra Bullock. He enjoyed many TV programs, including “Xena: Warrior Princess,” every “Star Trek” series, and everything on MeTV, especially “Svengoolie” on Saturday night. His other passion was oldies music, particularly 50s and 60s rock and roll. He created his own library of cassette tapes and CDs, meticulously filling every available segment of tape or disc, ensuring that there was no wasted space but that every song also was complete. He produced many as gifts to others. Notably, a sign in front of his house declared “Dodge Truck Parking Only.” Wayne also loved animals and kept his local birds and squirrels well fed. He was a fan of the Minnesota Vikings and Lynx teams. Wayne was well-known for his friendliness, jovial personality, sense of humor, and willingness to help others when he could. Honesty was his trademark. You knew where you stood with him; he spoke the truth as he saw it. Wayne enjoyed life and lived it to the fullest of his capabilities, even managing to toss out a witty quip or two on his last day. He will be dearly missed by his family and all who knew him. His family wishes to express their deepest appreciation to the staffs at New Horizons, Lake Region Hospital, Lake Region Health Care and Cancer Center, and Essentia Health and Sanford Medical Center in Fargo for all the care they provided for Wayne in his final days. Service: 11:00 a.m. Saturday, March 19, 2022, at First Lutheran Church in Fergus Falls, with visitation one-hour prior to the service at the church. Per family request, masks are required. Clergy: Reverend David Strom and Reverend Tiffany Sundeen Interment: First Lutheran North Cemetery, Fergus Falls, MN Arrangements provided by the Olson Funeral Home in Fergus Falls. Online condolences may be sent to www.olsonfuneralhome.com

Wayne Estenson passed away peacefully of complications from pancreatic cancer at Lake Region Hospital on February 12, 2022, one day before his 77th birthday. He was preceded in death by his parents, Donald and Luella (Weiss) Estenson. He... View Obituary & Service Information

The family of Wayne Estenson created this Life Tributes page to make it easy to share your memories.

Wayne Estenson passed away peacefully of complications from pancreatic...