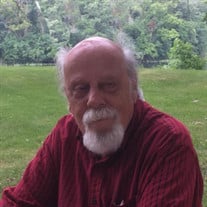 Warren Olsen, 93, of Fergus Falls, MN, beloved brother, uncle and friend of many passed away on Saturday, April 11, 2020 at Pioneer Home short-stay of complications related to a recent major stroke. Warren was born in New York, NY on April 10, 1927, the youngest of nine siblings (five brothers and four sisters) of the late Osmond and Jenny (Torjesen) Olsen. He was raised in NY, NY and was a graduate of Harran High School, class of 1944. Warren served in the US army for two years (1945-1947) following the end of WWII and later graduated from Columbia University, NY in 1951 with a Bachelor’s degree in History. Additionally, Warren attended the Summer Institute at St. Olaf College, MN in 1950, and he earned his Master’s Degree in Education from State University of New York College at New Paltz in 1966. He additionally worked on a PhD from the University of North Dakota begun in 1970 and had only to finish some French courses and his thesis. While a student at Columbia, Warren was very involved in InterVarsity Christian Fellowship. Following his graduation from college he did carpentry work until accepting a teaching position at the Greer School in Millbrook, NY from 1953-1963. When the school changed its mission, Warren accepted a teaching position for two years at Poughkeepsie High School in Poughkeepsie, NY from 1963-1965. Warren then joined the Hillcrest Lutheran Academy faculty in 1965 (Teacher/Dean of Men) and stayed on as Dean of Men until 1972. Warren began teaching English at the Fergus Falls Community College in 1968 and continued until 1992. Warren stayed on with M State as Art curator from 1992-2013 for the Fergus Falls campus as well as Wadena & Detroit Lakes. During his time as curator the college art collection was greatly enlarged due to his efforts. His fondest childhood memory was that of his mother taking him to museums and cathedrals on Sunday afternoons in New York city. The Cathedral of St. John the Divine, now in its 3rd century of construction, captured his mind at a very young age. In later life, the Cathedral of Chartres in France became a favorite remembrance. Warren loved literature, art and music, and was an encourager and supporter of many students and young artists down through the years. He was a good friend of artist Charles Beck and owned many of Beck’s prints. Warren also loved nature and through the years planted hundreds of trees on his property. He also was an avid hiker (he hiked Mt. Washington) and enjoyed cross country skiing and snowshoeing. Warren also traveled extensively in the US and abroad, including trips to Norway, England, France, Italy, Egypt, and the Holy Land. In addition to his love of family and friends Warren was actively involved in Bethel Lutheran Church and his faith. He taught many Bible classes at church in addition to several classes at Lutheran Brethren Seminary. He also served as the faculty advisor to InterVarsity Christian Fellowship at college for many years. Warren also had a beautiful and powerful tenor voice and sang in the Bethel Church choir for many years until quite late in his life. In addition, he also co-edited the Church of the Lutheran Brethren’s 1988 edition of Luther’s Small Catechism and updated the CLB Ministerial Acts with Rev. David Rinden and served on the CLB Board of Church Services for many years. Warren leaves a brother-in-law, Robert Pedersen of East Hartland, CT; a sister-in-law, Kari Olsen of Clearwater, FL; a longtime friend and honorary nephew, Paul Anderson of Fergus Falls, MN; and 11 nieces and nephews, Anna Ruth (Richard) Paddon of Murfreesboro, TN, Keith (Randi) Olsen of Brookville, FL, Nancy Batelli of Ramsey, NJ, Robert (Cheryl) Reme of East Hartland, CT, Edward (Carol) Hille of Manchester, CT, Ronald (Elizabeth) Hille of East Hartland, CT, John (Anne Marie) Olsen of East Hartland, CT, Arthur (Cathy) Olsen of East Hartland, CT, Edward (Thelma) Olsen of East Hartland, CT, Stanley (Cheryl) Olsen of Fergus Falls, MN, Judy (Robert) Pedersen, of East Hartland, CT, and Joanne Pedersen of East Hartland, CT, and 29 great nieces and nephews and many great, great nieces and nephews. He was predeceased by four brothers Olaf Olsen, Otto Olsen, Sverre Olsen and Einer Olsen; and four sisters, Anna (Tom) Traynor, Selma (John) Reme, Ella (Edwin) Hille, Ruth (Robert) Pedersen; two sisters-in-law, Martha (Olaf) Olsen, Ruth (Einer) Olsen; one niece, Evangeline (John) Hanson; and two nephews, Robert Pedersen, and John Pedersen. Graveside Service: 10:00 p.m. Tuesday, June 22, 2021 at Oak Grove Cemetery, Fergus Falls, MN. Please join Warren’s family for refreshments to follow at the home of Stan Olsen, 707 Woodland Loop, Fergus Falls, MN 56537. Clergy: Reverend David Strom Arrangements are provided by the Olson Funeral Home in Fergus Falls. Online condolences may be sent to www.olsonfuneralhome.com

Warren Olsen, 93, of Fergus Falls, MN, beloved brother, uncle and friend of many passed away on Saturday, April 11, 2020 at Pioneer Home short-stay of complications related to a recent major stroke. Warren was born in New York, NY on April... View Obituary & Service Information

The family of Warren Olsen created this Life Tributes page to make it easy to share your memories.