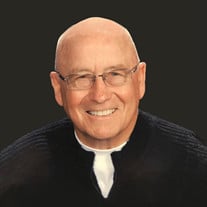 Wallace “Wally” Rodger Pearson, 79, a longtime resident of Fergus Falls, MN, died Saturday, March 17, 2018, at PioneerCare in Fergus Falls surrounded by his family Wally was born April 29, 1938, in Hallock, Minnesota, the son of Oscar and Anna (Gudmundson) Pearson. He graduated from Lake Bronson High School in 1956 and earned a Bachelor’s Degree in Chemistry and Mathematics from Concordia College in 1961. On December 29, 1962, he married Patricia Fitzpatrick in Minneapolis. Wally began his long and distinguished teaching and coaching career with a position in Ada, Minnesota in 1961. While at Ada, he was an assistant coach on two State Tournament teams. One in his first year in 1961, and one in his final year in 1966. These occurred during the one class system in the state of Minnesota. In 1966, he began a 29-year-career as a math teacher in Fergus Falls, focusing mainly on geometry. In 1975, he was named Teacher of the Year. Wally served as assistant coach of track for four years, football for 30 years and basketball for 25 years. He was head basketball coach of the Fergus Falls Otters 1972-1977. In 2012, Wally was inducted into the Fergus Falls Hall of Fame for Distinguished Service. In 1968, Wally founded the Otter Basketball Camp near Dent, Minnesota, with Denny Anderson and Glen Mesker, directing the camp until 1986. He was also a founder of the Otter Backcourt Club in 1978, which promotes youth basketball in Fergus Falls on an extracurricular basis for children in grades 3 - 8. One of Wally’s great pleasures was spending time with his grandchildren and sharing his love of sports. His other hobbies included watching basketball, football and baseball, fishing, hunting pheasant and deer, and enjoying a beer with buddies after a day in the field. Wally enjoyed the simple things in life. He always greeted everyone he knew with a big smile and enjoyed engaging in a conversation. We cannot count the number of lives he touched over the years, but he was grateful for them all. In honor of his years of coaching in Fergus Falls, please wear Maroon and Gold to the memorial service on Thursday. Wally is survived by his wife of 55 years, Patty; and their three children, Keith, Kevin and Kristi, all of whom live in Fergus Falls. Keith and Michelle (Hoff) have three sons, Drew, Ty and Nic. Kristi and Kenn Edman have two sons, Seth and Sean. Kevin and Laura (Reitmeier) have four children, Lily, Paige, Luke and Sarah. He is also survived by his sister, Mary Ann Campbell of Fergus Falls. Visitation: 5-7 p.m. Wednesday, March 21, 2018, with a 6:30 public prayer service at Olson Funeral Home in Fergus Falls, MN, and resumes one hour prior to the service at the church Service: 2 p.m. Thursday, March 22, 2018, at Bethlehem Lutheran Church, Fergus Falls, MN Clergy: Revs. Tom Peterson and Jake Anderson Interment: Bethlehem Cemetery, Fergus Falls, MN Arrangements are provided by the Olson Funeral Home in Fergus Falls Online condolences may be sent to www.OlsonFuneralHome.com

The family of Wallace "Wally" Pearson created this Life Tributes page to make it easy to share your memories.