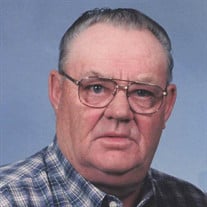 Wallace Jorgenson, 87, of rural Fergus Falls, died Sunday, October 18, 2020. Wallace was born July 8, 1933, to Oscar and Rose (Thompson) Jorgenson in Ambrose, ND. Wallace worked in construction in Beaver Bay, MN, before marrying Marion. Wallace and Marion (Schleske) were married on March 20, 1954, at Trinity Lutheran Church in Fergus Falls. They moved to the family farm in rural Fergus Falls, and together they raised 5 children: Bruce, Brenda, Brian, Beth, and Brad. Wallace farmed their land and had dairy cattle. In 1980 he sold his cows, but continued farming until he retired in 2003. After his retirement he continued farming, working for his neighbor, Larry Buchholz. Wallace was member of Stavanger Lutheran Church in Fergus Falls. Wallace loved cutting wood and planting their gardens. In his earlier years, Wallace enjoyed hunting and fishing. He liked going for drives with Marion in the summer to look at the crops in the fields. In the fall they enjoyed driving in the hills near their house looking at the beautiful fall colors. For many years they would make an annual trip to the North Shore to take in the scenery as well. He enjoyed any time spent with his family, but especially loved it when his grandchildren and great-grandchildren could all be present. Wallace is preceded in death by his son, Bruce Jorgenson; parents, Oscar and Rose Jorgenson; brothers, Dennis and Darrel Jorgenson; and father-in-law and mother-in-law, Otto and Lucy Schleske. He is survived by his wife of 66 years, Marion; brother, Stanley Jorgenson of Modesto CA; sister, Marilyn Johnson of Breckenridge; his children, Brenda (Dale) Thompson of Underwood, Brian (Nici Johnson) Jorgenson of Fergus Falls, Beth (Jonathan Kumm) Hockert of Fergus Falls, Bradley (Karma) Jorgenson of Fergus Falls; his grandchildren, Mathew (Jill) Rugg of Glendive, MT, Tyler (Michelle Anderson) Thompson of Moorhead, Nichole (Jacob) Boehland of Battle Lake, Jason (Cassie) Jorgenson of West Fargo, ND, Zachary (Kayla Lehmann) Jorgenson of Fergus Falls, Madison (Evan Bohn) Jorgenson of Rothsay and Alana Johnson of Fergus Falls; and eight great-grandchildren. Memorial Service: 1:00 PM Friday, October 23, 2020, at Stavanger Lutheran Church of rural Fergus Falls. Due to COVID-19 seating is limited to family and a few close friends. Arrangements are provided by the Olson Funeral Home in Fergus Falls. Online condolences may be sent to www.olsonfuneralhome.com

The family of Wallace Jorgenson created this Life Tributes page to make it easy to share your memories.