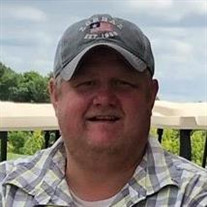 Wade John Bugbee, 40, of rural Erhard, died of natural causes at his home on Thursday, December 5, 2019. He was born on February 15, 1979, in Fergus Falls, the son of John and Candy (Aune) Bugbee. He attended school in Underwood. Following his graduation from high school, he began working in the surveying department for Otter Tail County and has continued to be employed there. Wade still lived in the home he grew up in. He was the founder and owner of Bugbee’s Big Buck Ranch. He was at all Underwood football games and OTC wrestling matches, supporting all the athletes. He loved hunting, fishing, being in the woods and on the farm, and everything outdoors. He was a member of Messiah Lutheran Church of Underwood. He had many, many friends, some of whom were like family, and spent much time with all of them, always with a smile and making people laugh. Preceding him in death were his father, John; grandparents Ken and Olga Aune; grandpa John “Jack” Bugbee; uncle Dave Bugbee; aunt and uncle Merle and Diane Fredrickson; cousin, Monte Bugbee and his faithful friend Daisy. Survivors include his mother Candy of Fergus Falls; brother, Darin of Bismarck; sister, Joy (Scott) Finkelson of Avon; nephews and nieces, John, Grace and AnnaClaire Bugbee, Hannah and Connor Finkelson, and Anthony Grienke; Grandma Marge Bugbee; several aunts, uncles and cousins; along with his faithful companion, Charlotte, his cat. Visitation 5-7 p.m. with a 6:30 p.m. prayer service, Tuesday, December 10, 2019, at the funeral home and will resume one hour prior to the service at the church Service 11 a.m. Wednesday, December, 11, 2019, at Grace United Methodist Church, Fergus Falls Clergy Rev. Lee Kantonen Interment Messiah Cemetery rural Underwood Olson Funeral Home, Fergus Falls, is in charge of arrangements Online condolences may be sent to www.olsonfuneralhome.com

Wade John Bugbee, 40, of rural Erhard, died of natural causes at his home on Thursday, December 5, 2019. He was born on February 15, 1979, in Fergus Falls, the son of John and Candy (Aune) Bugbee. He attended school in Underwood. Following... View Obituary & Service Information

The family of Wade John Bugbee created this Life Tributes page to make it easy to share your memories.