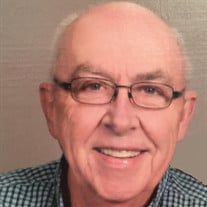 Virgil Martinson, 73, a resident of rural Erhard, died Monday, July 15, 2019 with his family at his side at Sanford in Fargo. Virgil Gene Martinson was born in Fergus Falls to William (Bill) and Orion (Hawley) Martinson on May 15, 1946. He grew up in Underwood where he attended school. He graduated in 1964 and then attended Interstate Business College. Virgil served in the U.S. Army from 1966-1969. He was stationed at Fort Monmouth in New Jersey and Fort Richardson in Anchorage, Alaska where he worked on a missile site for the U.S. Army Signal Corps. On September 18, 1965 he married Myrna Hagen at Maine Presbyterian Church in rural Underwood. To this union they had two daughters, Patsi and Pamela. After moving back from Anchorage, they made their home in the Underwood area. Virgil worked in bookkeeping and accounting jobs throughout his career. He worked for National Tea packing plant, Retail Credit, Worner Auto Sales and most recently at Nelson Auto Center from which he retired in 2008. He also did bookkeeping for several small businesses. He was an active member of the Sverdrup Lutheran Church where he served on the Church Council, as church treasurer and as a member of the Monday Morning Men’s Cleaning Crew. He was a volunteer member of the Underwood Fire Department and served on the Underwood City Council. Virgil enjoyed volunteering at the Fergus Falls Food Shelf after he retired. He adored his family and had many friends from all walks of life. He enjoyed yard-work, fishing and hosting fish fries, making lefse and rhubarb jam, maple syruping in the Spring and traveling to Montana and Alaska. He never missed watching a Vikings game and followed the Minnesota Twins. Late night bowls of popcorn were a regular event. Virgil was an excellent cook and took pride in carrying on the tradition of Saturday morning rolls with his children and grandchildren. Preceding him in death are his parents; a sister, Patsy Lou; and brother-in-law, Dwight Hanson. Virgil is survived by his wife, Myrna of Erhard; his daughters, Patsi (Joel) Kugler of Erhard and Pamela (Scott) Schmitt of Dell Rapids, SD; grandchildren, Lauryn (Jake) Christensen of Battle Lake, Aaron (fiancé Paige Weber) Kugler of Henning, Sadie, Sam and Sommer Schmitt of Dell Rapids, SD; great-grandchildren, Henry, James and Hattie Christensen of Battle Lake; brother, Duane (Linda) Martinson of Missoula, MT; sisters-in-law, Joyce Hanson of Fergus Falls and Norma (Richard) Haugdahl of Henning; and many nieces and nephews. Blessed be the memory of Virgil Martinson. Visitation: Sunday, July 21, 2019 at the Olson Funeral Home from 4:00-6:00 pm, with a public prayer service at 6:00. Visitation will resume one hour prior to the service at the church. Service: Monday, July 22, 2019 at Sverdrup Church at 11:00 am Clergy: Reverend Martha Halls Military Rights: Fergus Falls VFW Post #612 and Fergus Falls American Legion Post #30 Interment: Silent Vale Cemetery, Maine, MN Arrangements are provided by the Olson Funeral Home in Fergus Falls Online condolences may be sent to www.OlsonFuneralHome.com

Virgil Martinson, 73, a resident of rural Erhard, died Monday, July 15, 2019 with his family at his side at Sanford in Fargo. Virgil Gene Martinson was born in Fergus Falls to William (Bill) and Orion (Hawley) Martinson on May 15, 1946. He... View Obituary & Service Information

The family of Virgil Gene Martinson created this Life Tributes page to make it easy to share your memories.