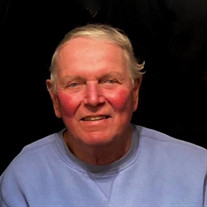 Virgil Evavold passed away Friday, March 25, 2022, at his home in rural Fergus Falls at the age of 74. Virgil was born February 21, 1948, in Fergus Falls, MN, the son of Arthur and Sarah (Mekalson) Evavold. He was baptized and confirmed at Grue Lutheran Church of rural Ashby. He attended grade school at District #285 and graduated from Battle Lake High School in 1966. He obtained his AA degree from the Fergus Falls Junior College and his Bachelor of Science in Business Education from Moorhead State College. Virgil’s love for music was instilled in him at a very young age. Through his childhood years, he and his siblings would often share their musical talents with friends and neighbors at church and school. In the late 60’s and early 70’s, he performed in the Country Ventures band as a singer and played bass guitar. He also served in the army reserves where he and his buddy won a talent contest. Throughout the years he continued to sing at church and at weddings. On June 10, 1972, he married the love of his life Vicki (Mark) Evavold at Tordenskjold Free Lutheran Church, of rural Underwood, where he was a member and served in a variety of roles. They resided on a farm in rural Fergus Falls where they raised their four kids, milked cows for 21 years, and later switched to beef cattle with his sons. He drove truck for Mark Sand & Gravel, was a substitute teacher for the Underwood School District #550 and later was hired as a business teacher and taught for 33 years. During that time, he enjoyed coaching girls’ basketball and track & field. After retirement, he worked for Moe Farms for 9 years and took pride in helping his wife with cleaning jobs. Virgil loved his family dearly, was proud of his children, and cherished his precious grandchildren. He enjoyed snowmobiling, hunting trips to South Dakota, fishing in Canada, and most of all farming and caring for animals. He loved reading about ways to improve farming. His motto was “You’re never too old to learn.” He will be remembered for telling Norwegian jokes, where he would slap his leg, laugh at himself, point at you, laugh, and tell the joke again. He used his God-given gift by loving on others and bringing joy to their lives. He is preceded in death by his parents: Arthur and Sarah Evavold; in-laws: Connie Mark, Floyd and Norita Mark; siblings: Donald, Glenn, and Charles Evavold; grandson: Lane Evavold; sister-in-law: Joyce Evavold and brothers-in-law: Steve Mark and Mark Moore. He is survived by wife Vicki Evavold; children: Scott, Jason (Tara), Brandon (Amy) Evavold, and Ashley Olson; grandchildren: Montana, Morgan, Brianna, Tristan, Alayna, Drew, Levi, Annabelle, Dylan, Colton Evavold and Quinn and Easton Olson; siblings: Jerome (Mary) Evavold, Sylvia (Duane) Burau, LaVaye (LeWayne) Herness, Darlene (Richard) Akerman; sisters and brothers in-law: Peg Evavold, JoAnne Evavold, Linda Rostad, Sharon Mark, Sue Moore, Deb (Brad) Odegard, Mike (Tammy) Mark, and Matthew Mark. Virgil is also survived by numerous nieces, nephews, friends, wonderful neighbors, and his faithful dogs Bubba & Lily. Memorials are preferred to Tordenskjold Free Lutheran Sunday School Fund. Visitation will begin at 11 am Friday, April 1, 2022 at Zion Sarpsborg Free Lutheran Church in Dalton Minnesota, with the funeral to follow at 1 pm. Burial will be at the Tordenskjold Free Lutheran Cemetery of rural Underwood. Please refer to Virgil's Tribute Wall for a link to the livestream. Arrangements provided by Olson Funeral Home in Fergus Falls. Online condolences may be sent to www.olsonfuneralhome.com

Virgil Evavold passed away Friday, March 25, 2022, at his home in rural Fergus Falls at the age of 74. Virgil was born February 21, 1948, in Fergus Falls, MN, the son of Arthur and Sarah (Mekalson) Evavold. He was baptized and confirmed at... View Obituary & Service Information

The family of Virgil Evavold created this Life Tributes page to make it easy to share your memories.