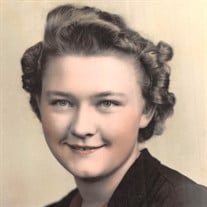 Viola Larson, 94, of Rothsay, died peacefully on Sunday, July 7, 2019, surrounded by family at the St. Francis Nursing Home in Breckenridge. She was born March 7, 1925, to Floyd and Stella (Schott) Wheeler. She attended Tintah High School, graduating in 1943; also working on the family farm in Tintah. She then moved to Fergus Falls, working at Runnigan’s Café and Lake Region Healthcare. In 1965, she married Warren Larson in Sisseton, SD. They welcomed their only son Dale, in 1966. They moved to Erhard, where they owned and operated a farm. In 1972, they moved to Rothsay where they farmed. Viola also worked as a cook at the Rothsay Truckstop. She then worked at West Central Turkeys in Pelican Rapids, retiring in 1993. Viola then devoted herself to being a full-time grandma. Viola was a long-time member of Grace Lutheran Church in Erhard. She was a member of the Wounded Warrior Project and also the Fergus Falls VFW. Her biggest highlight was her family and spending time with them. She enjoyed her coffee along with good conversation, gardening, baking, canning, and sewing. Throughout her life she also had a passion for animals. She is preceded in death by her parents; husband; siblings, Merle Wheeler and Dorothy Nelson (Wheeler); and her son, Dale Larson. She is survived by her grandchildren, Justin Larson (Missy) of Rothsay, Megan Larson (Anthony) of Sioux Falls, SD, and Cody Larson of Rothsay; daughter-in-law’s, Christina of Rothsay and Kathryn (Scott) of Brookings, SD; great-grandchildren, Miranda, Warren, Jackson, Gage, Libby, and Mason; and along with numerous nieces and nephews. Visitation: 1 hour prior to the Service Service: 11:00 a.m. on Friday, July 12, 2019 at Grace Lutheran Church in Erhard Clergy: Reverend Brad Soenksen Interment: Bagstevold Cemetery Erhard Arrangements provided by Olson Funeral Home, Fergus Falls, MN. Online condolences may be sent to www.olsonfuneralhome.com

The family of Viola Larson created this Life Tributes page to make it easy to share your memories.