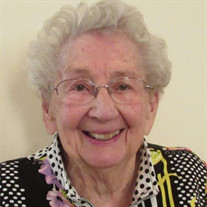 Viola A. Hanson passed away on November 8, 2019 in Fergus Falls, MN, at the age of 97. Viola Avon Skalisky was born in Wadena County, MN., on October 5, 1922. She was the eldest daughter of Jerry and Pearl (Fischer) Skalisky. Her early years were spent in the Wadena area. After graduating as valedictorian from Wadena High School in 1940, Viola attended Staples Normal Training School. She then taught rural District #285, south of Battle Lake for two years. She went on to earn a bachelor’s degree from Moorhead State in 1967. On December 21, 1942, Viola married Eddie Hanson of rural Underwood. They were blessed with three children: Anita (1943), Jerry (1945), and Kathleen (1946). Viola and Eddie lived on the family farm from 1942 until 1976. In 1976 they built a new home on the east side of the farm where they lived for 19 years. In 1995 they moved to Fergus Falls. After Eddie’s death in 2004, Vi moved to the Village Cooperative. In 2016 she moved to assisted living in Park Gardens. As her health declined, Vi was moved to Pioneer Care in 2018, where she passed away. Viola devoted her life to her family, her home, and her community. She returned to her teaching career in 1956 and taught in rural Otter Tail County schools until 1968, when she began teaching in Fergus Falls. She retired in 1985. Vi was an active member of Trefoldighed Lutheran Church, teaching Sunday School and held various offices in the WELCA. Viola loved to travel. Destinations included Norway, twice, and New Zealand, Fiji Islands, Alaska, most of Europe, and many places in the United States. Vi loved to cook. She was always ready to have folks in, taking such joy in the process. She was also an avid reader and watcher of the Minnesota Twins. Preceding her in death were her parents, husband Eddie (2004), and daughter Anita (1974), and four of her siblings: Edna Nueshwander, Harland Skalisky, Geraldine Bailey, and Lorraine Kniefel. She is survived by one brother, Dale (Wanda) Skalisky, two children, Jerry Hanson of Mountain Home, AR., and Kathleen (James) Knutson of Eagle, ID, plus grandchildren Laurie (Doug) Donaldson of White Rock, BC, Canada; Rob (Suzanne) Knutson, Coeur d’Alene, ID.; Kurt (Janelle) Knutson, Eagle, ID.; and Erik (Sylva) Hanson, Melrose, WI, and 13 great-grandchildren. Celebration of Life: Sunday, November 17, 2019, at 2:00 p.m. at the PioneerCare Celebration Center in Fergus Falls Visitation: One-hour prior to the service at the PioneerCare Celebration Center Clergy: Chaplain David Strom Arrangements provided by the Olson Funeral Home in Fergus Falls. Online condolences may be sent to www.olsonfuneralhome.com

Viola A. Hanson passed away on November 8, 2019 in Fergus Falls, MN, at the age of 97. Viola Avon Skalisky was born in Wadena County, MN., on October 5, 1922. She was the eldest daughter of Jerry and Pearl (Fischer) Skalisky. Her early years... View Obituary & Service Information

The family of Viola A. Hanson created this Life Tributes page to make it easy to share your memories.