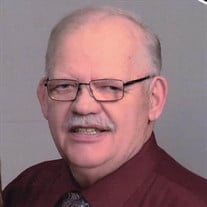 Vernyl Dale Fronning, 72, of Aastad Township, died peacefully, surrounded by family on Thursday, June 10, 2021. Vernyl was born March 2, 1949, in Fergus Falls to Palmer and Mabel (Holte) Fronning. He graduated from Fergus Falls High School in 1967 and Alexandria Area Technical School in 1969 with a degree in Production Agriculture. On October 15, 1977, he married Cathie Hauge at Trinity Lutheran Church in Fergus Falls. Their marriage was blessed with two sons, Joshua and Brandon. Vernyl loved being their father. Vernyl farmed his whole life. The family farm was where he developed a strong work ethic. He raised his family on this farm and never considered himself retired. Vernyl was also employed by Ottertail Coaches for many years. Vernyl was baptized and confirmed at Aastad Lutheran Church where he was a lifelong member and served various positions on the church council. He served on the Dalton Creamery Board, including a term as president, and was an adult 4-H leader. Helping his sons with their 4-H cattle projects and watching them show cattle at the county and state fairs was something he particularly enjoyed. He continued to enjoy going to the county fair and watching 4-H events long after his own children were no longer involved. Whether it was from the cab of the tractor, the windows of the house or on a walk with his dog, Quinn, by his side, Vernyl liked to watch the wildlife in the fields and around the farm. One of his favorite pastimes was driving, whether it was checking out the countryside, or just “driving around the block.” Many times, these trips would include stopping somewhere for coffee, a cookie and conversations. He enjoyed conversations with family, friends, and strangers alike. He was preceded in death by his parents, Palmer and Mabel; brothers, Maynard, Orris, and Tim; sisters-in-law, Marilyn Fronning and Vi Fronning. Vernyl is survived by his wife, Cathie of Fergus Falls; children, Joshua of Moorhead and Brandon of Fergus Falls; sisters, Shirley (Daryl) Frigaard of Dalton, Elaine (Larry) Larson of Elbow Lake, Joyce (Marvin) Peterson of Rothsay and Doris (Al) Neuman of Fargo; brother, LeRoy (Cindy) Fronning of Fergus Falls; sister-in-law, Marie Fronning of Fergus Falls; and numerous nieces and nephews. Visitation: 4:00 p.m. to 6:00 p.m. Sunday, June 20, 2021, at the Olson Funeral Home in Fergus Falls and will resume one-hour prior to the service at the church. Funeral Service: 1:00 p.m. Monday, June 21, 2021, at Aastad Church, rural Fergus Falls Clergy: Reverend Kate Bruns Interment: Aastad Lutheran Cemetery, rural Fergus Falls Arrangements provided by the Olson Funeral Home in Fergus Falls. Online condolences may be sent to www.olsonfuneralhome.com

The family of Vernyl Fronning created this Life Tributes page to make it easy to share your memories.