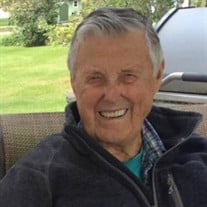 Vernon L. Peterson was born on January 13, 1923, to Ole K. and Galena (Kleven) Peterson in Westbrook, MN, and grew up on the family farm. He moved with his family in 1937 to a farm south of Tracy, MN and attended a country school. As a young man, he worked with his family on the farm. On January 7, 1946, he married Shirley McClain and lived on a farm in Balaton. He later moved his family to a farm south of Marshall, where he raised his family and lived there for 17 years. In 1967, they purchased their current farm in Wendell, off Lightning Lake. He raised livestock with the help of his sons, and the girls assisted where the boys left off. He enjoyed farming, raising his family, driving around on a Saturday night and ‘checking his crops’. He especially enjoyed listening to Big Band tunes, and didn’t hesitate to turn the channel if his family was listening to any other style of music. In his later years, he enjoyed karaoke, going to dances, and visiting his children around the country, all the while continuing to grow his farm with two of his sons. He retired to Mesa, AZ and enjoyed the winters there and loved returning to Minnesota in the spring. Vernon was always interested in learning anyone’s lineage and their life story. He never met a stranger and treated every person as an old friend. He was a member of Our Lady of Victory Catholic Church and a past member of the Wendell Farmer’s Elevator Board and Knights of Columbus. On Monday, July 30, 2018, Vernon passed away at his farm surrounded by his large and loving Swedish-Norwegian-Dutch-Scotch-Irish family. Vernon is survived by his wife of 72 years, Shirley Peterson, and 12 children: Annette (Frank) Crowder, of Vero Beach, FL, Alan (Lois) Peterson of Boise, ID, Corwin (Lorinda) Peterson of Boise, ID, Lamont (Becky) Peterson of Pine River, MN, Colleen (Bob) Eason of Boise, ID, Sherri (Tom) Peterson of Weimar, CA, Shelly (Keith) Kastenmeier of Blaine, MN, Owen (Angie) Peterson of Wendell, MN, Juliet (Robert) Bruno of Vero Beach, FL, Lisa (Michael) Raiola of Scottsdale, AZ, Kim Peterson of Plano, IL, Tanya (Troy) Gillespie, Elbow Lake, MN; 38 grandchildren; 17 great-grandchildren, along with one more due in August 2018. He is also survived by numerous nieces, nephews and many, many friends. He was preceded in death by his parents; five brothers, Omar, Harvey, Victor, Maynard, and Dennis; five sisters, Gladys, Blanche, Darlene and Hildur son-in-law, Joseph Foerner and an infant great grandson Beckham Owen Peterson In lieu of flowers please send donations to Savior Hospice, Phoenix, AZ, LB Hospice, Fergus Falls, MN and the Grant County Humane Society. Visitation: 5-7 p.m. Thursday, August 2, 2018, at Olson Funeral Home with a 6:30 p.m. prayer service and will resume one hour prior to the service at the church Mass of Christian Burial: 11 a.m. Friday, August 3, 2018, at Our Lady of Victory Catholic Church, Fergus Falls Clergy: Father Alan Wielinski and Deacon Chuck Kampa Interment: St. Otto’s Catholic Cemetery, Fergus Falls, MN Olson Funeral Home, Fergus Falls, is in charge of arrangements

Vernon L. Peterson was born on January 13, 1923, to Ole K. and Galena (Kleven) Peterson in Westbrook, MN, and grew up on the family farm. He moved with his family in 1937 to a farm south of Tracy, MN and attended a country school. As a young... View Obituary & Service Information

The family of Vernon Leroy Peterson created this Life Tributes page to make it easy to share your memories.