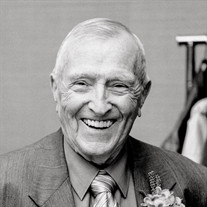 Vernon John Juel Drechsel, 85, of Fergus Falls, MN died on August 7, 2019 at Lake Region Healthcare. Vernon was born on April 7, 1934 in Fergus Falls to Herbert and Myrtle (Hovland) Drechsel. Vernon married the love of his life, Shirley Ann Hauge on September 8, 1956. After they married, they moved to Fort Bragg, NC where Vernon proudly served his country in the 82nd Airborne. After completing his Army tour of duty, they moved back to Fergus Falls where they started their family. Vernon went to work for Ottertail Power Company where he retired as a Dispatch Training Coordinator. He enjoyed his Ottertail Power family and his own family knew that if there was a storm, he would be working around the clock to keep the power on. He was also very active in his church, Immanuel Lutheran Church, where he was baptized and confirmed. His life centered around his faith and his church family. He served in every church position and could often be seen on his John Deere tractor mowing and tending to the cemetery with a smile on his face. He was a member of the Kiwanis and the American Legion, he coached countless sports teams, and was always volunteering in his community. He brought to life the expression that there are no strangers in the world – only friends yet to be made. Everywhere he traveled, he departed with new friends and later he would recount how he knew them and all about their families. He loved to laugh, work hard, volunteer and serve. He always took time to listen and provide council. Many came to him for advice and looked to him as a father figure. But his greatest joy in life was his wife and his family. Nothing made him smile more than when Shirley walked into the room and he celebrated every day they had together. He raised his children to build their own families based on the same values that he taught them. Later when he was blessed with grandchildren – his goal was to become the number one grandpa – one in which he excelled. He would often be in the hockey locker room tying skates for the whole team, clapping at a band concert, teaching them how to hunt and love the land or sitting on the soccer field sideline. If he missed any of the grandchildren’s events – he would call them afterwards to hear all about it. He was known to all as Grandpa Vern regardless of whether you were lucky enough to be one of the six. He will be dearly missed by his wife, Shirley Ann Hauge Drechsel; three children, Paul (Carol) of Grand Forks, ND, Annette (Bret) Shoberg of Hanover, MN, Jay (Janet) of Fargo; six grandchildren, Justin (Jamie) Drechsel of Fortuna, CA, Tyler (Erin) Shoberg of Fargo, Andrea (John) Sherlock of Fargo, William (Ina) Drechsel of West Fargo, Katherine (Aaron Podoll) Drechsel of Aurora, CO, Monica Shoberg of Coos Bay, OR, and eight great-grandchildren, Michaela, Kaleb and Bodie Drechsel, Emma, Lydia and Daphne Sherlock, Nolan and Lauren Shoberg, and baby Drechsel on the way. He will also be missed by his brothers and sisters, Herbert Drechsel Jr, David (Gloria) Drechsel, Duane (Marilyn) Drechsel, Vernell (Debbie) Drechsel, Patti Dowd, and Carroll (Pauline) Drechsel; brothers-in-law and sister-in-law, Thomas (Linda) Hauge, Ronald (Marlene) Hauge, and Becky Petersen, and numerous nieces and nephews. Vernon was preceded in death by his parents, Herbert and Myrtle Drechsel and his sister, Marion Schiesser. In lieu of flowers, memorials may be given to Immanuel Lutheran Church. Visitation: Sunday August 11, 2019 from 4:00-6:00 p.m., with a prayer service at 5:30 p.m. at the Olson Funeral Home in Fergus Falls. Visitation will resume 1-hour prior to the service at the church. Service: Monday, August 12, 2019 at 11:00 a.m. at Immanuel Lutheran Church rural Fergus Falls Clergy: Reverend Gary Rehborg Military Participation: Fergus Falls VFW Post #612 and Fergus Falls American Legion Post #30 Interment: Immanuel Lutheran Cemetery rural Fergus Falls Arrangements are provided by the Olson Funeral Home in Fergus Falls. Online condolences may be sent to www.OlsonFuneralHome.com

The family of Vernon "Vern" Drechsel created this Life Tributes page to make it easy to share your memories.