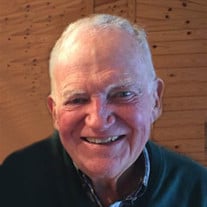 On October 25, 2018, Timothy Joseph Cashman passed away at the age of 77. He died of heart disease surrounded by family in the home of his brother, Daniel, in Bismarck. Tim was born on March 19, 1941 in Owatonna, Minnesota, to Thomas Eugene and Dorothy (Ulland) Cashman. He grew up in Fergus Falls, Minnesota and Fort Lauderdale, Florida. He played football for the Fergus Falls Otters and was co-captain of the team. He attended the University of Minnesota on a football scholarship and played in two Rose Bowls in 1960 and 1961. In later years he coached football at Fergus Falls Community College. While at the university he was a member of the Chi Psi Fraternity. After obtaining a B.S. degree in Business Administration, he moved to Minot, ND, and opened a branch of Cashman Nursery which was founded in Owatonna, MN, in 1898, by Tim’s grandfather. Tim was a third-generation nurseryman. He sold nursery stock in Minot, mainly using the State Fair Grounds but traveled through North Dakota and Montana. His customers became life-long friends. Tim was an avid supporter of Bishop Ryan High School, the Elks and the great outdoors. He enjoyed the comradery of friends and family from Fergus Falls and North Dakota as they hunted and fished. You could be a flyer or a turtle, but the fun was being together. His black lab hunting dogs were constant companions. Those are the memories dear to his heart. In 2001, Tim was honored to be named to the Hall of Fame of Fergus Falls. Tim was also a devout Catholic, he attended St. Leo’s and enjoyed the parish community. Timothy is survived and will be missed by: his sisters, Joan Hildreth, Montauk, NY, Anne DiMott, Mahtomedi, MN and Connie (Charles) Pieper, Park Rapids, MN; brothers, Daniel (Carol) Cashman, Bismarck, ND and Jeremiah (Jan) Cashman, Bozeman, MT; and numerous nieces, nephews, Godchildren, great-nieces and great-nephews. Tim was preceded in death by his parents and his brother, Thomas Cashman. Visitation: Thursday from 5 to 7 p.m. at Thompson-Larson Funeral Home, Minot. Vigil Prayer Service: Thursday at 7 p.m. at Thompson-Larson Funeral Home, Minot. Mass of Christian Burial: Friday, November 2, 2018, at 10:30 a.m. at St. Leo the Great Catholic Church, Minot. Public Visitation: Saturday, November 3, 2018, at 10:30 am at Olson Funeral Home, 711 Pebble Lake Road, Fergus Falls, MN. Interment: Saturday at 11:30 am at St. Otto’s Catholic Cemetery, Fergus Falls, MN. In lieu of flowers, memorials can be made to Bishop Ryan Catholic School, 316 11th Ave NW, Minot, ND, 58703, or to St. Leo the Great Catholic Church, 218 1st St. SE, Minot, ND, 58701, or a charity of your choice. Olson Funeral Home, Fergus Falls is providing local arrangements online condolences may be sent to www.olsonfuneralhome.com

On October 25, 2018, Timothy Joseph Cashman passed away at the age of 77. He died of heart disease surrounded by family in the home of his brother, Daniel, in Bismarck. Tim was born on March 19, 1941 in Owatonna, Minnesota, to Thomas Eugene... View Obituary & Service Information

The family of Timothy J. Cashman created this Life Tributes page to make it easy to share your memories.