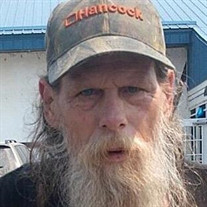 Thomas LeRoy Hanson, 58, of Fergus Falls, died at home peacefully in his sleep Friday January 25, 2020. Tom was born in Fergus Falls, on September 2, 1961, to LeRoy (Bud) and Beverly “Bev” (Schummer) Hanson. He was the youngest of six siblings. He attended school in Fergus Falls and later the Detroit Lakes Technical College. Tom worked various jobs in Fergus Falls, Indianapolis, IN, and Oklahoma City, OK during his lifetime. He was employed at EXCEL Plastics in Fergus Falls at the time of his death. Tom was joined in marriage to Beth Stoen on August 12, 1991. They had one daughter, Erica, born on April 25, 1992. He was preceded in death by his father, LeRoy; mother, Beverly, and a brother, Michael. Tom is survived by his daughter, Erica Hanson of Fergus Falls; sisters, Carol (Mel) Klein and Pam (Jeff) Hanson; brothers, Duane (Kim) Hanson and Terry (Colleen) Hanson; grandchildren, Xavian, Xianna, and Xayden, along with many nieces, nephews, cousins, and special friends. A Celebration of Life will be held at a later date. Interment: First United Church of Christ Cemetery Fergus Falls, at a later date. Arrangements are provided by the Olson Funeral Home in Fergus Falls. Online condolences may be sent to www.olsonfuneralhome.com

The family of Thomas LeRoy Hanson created this Life Tributes page to make it easy to share your memories.