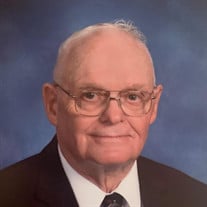 Theodore Richard “Pat” Brown left this world on Thursday, October 15, 2020, under the care of PioneerCare and LB Hospice in Fergus Falls. He was born May 29, 1935, on a farm near Barrett, MN, to parents Roy and Ella (Spaulding) Brown, the “caboose” on a train of 6 older siblings. Pat grew up in the Dalton area. He was baptized and confirmed at Our Savior’s Lutheran Church and attended Tumuli Township rural school districts 7 and 139 before leaving school in the 8th grade to help on the family farm. In 1957 he met and married his wife of 52 years, Ethel Andersen, in Dalton. He served 6 years in the Army Reserves. Pat held various jobs throughout his life, including working for Coca-Cola Bottling Co. and the City of Fergus Falls. A farmer at heart, he worked at Ebersviller Implement Company (John Deere) for 22 years, where he assembled and repaired farm machinery. After 11 years at United Building Center, he retired in 1997. Pat was a youth leader in Cub Scouts, Dane Prairie 4-H, and active in Town & Country Saddle Club. He volunteered at the local food shelf and served as a janitor for Swan Lake Lutheran Church. He was a hard worker, and there wasn’t much he couldn’t build or fix. Things that made him happy include tinkering with old farm machinery, riding horses, polka music, drives in the country, and taking care of his yard. He loved hamburgers and hated rice. He will be remembered for his storytelling, his attention to detail, and his kind heart. The last of his generation, Pat was preceded in death by his parents, siblings, brothers and sisters-in-law, several nephews, and many close friends. His wife, Ethel, passed in 2009. Pat is survived by his son Patrick and daughter-in-law Lynnette of Nashville, TN; his daughter Ellen and son-in-law Chris of Duluth, MN; three grandchildren, Hannah, Andrew, and Joshua, of Nashville, TN; and many special friends and neighbors around the Fergus Falls and Dalton area. Rest in peace, Dad, grandpa, uncle, and friend. You will live in our hearts forever! The Brown family would like to thank Pat’s doctors at Lake Region Healthcare and the PioneerCare Center and LB Hospice staff for their care, compassion, and kindness. Due to the pandemic, there will be no public service. Pat’s ashes will be buried next to Ethel’s in Dalton, so stop and say hello if you are passing through. Should friends desire, memorials are preferred to LB Hospice or the charity of their choice. Assistance provided by the Olson Funeral Home in Fergus Falls. Online condolences may be sent to www.olsonfuneralhome.com

The family of Theodore "Pat" Brown created this Life Tributes page to make it easy to share your memories.