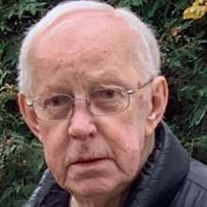 Stephen Blair Carter, 75, of Fergus Falls, died Sunday, August 23, 2020 at his home. Stephen was born December 24, 1944, in Fergus Falls, the son of William and Klara (Knoff) Carter. He attended Adams and Cleveland Elementary Schools and graduated from Roosevelt Senior High School in 1963. He then attended Wahpeton School of Science for two years, studying auto technology. He enlisted in the Army Reserves and served for six years. In 1967 he married Tracy Scott and moved to Minneapolis He began his employment with Honeywell in 1966 and retired in 2002. He enjoyed fishing and traveling. In his spare time, he learned to quilt and made one for each of his grandchildren. Stephen was an avid Minnesota sports fan. Preceding him in death were his parents and sister, Karen Ringstad. Stephen is survived by his children, Jon (Missy), Jeff, Ben, and Matt; grandchildren, Tyler (Samantha), Aaron, Hunter, and Cheyenne; brother-in-law, Richard Ringstad; friend, Char Madsen; niece, Debbie Gagldari; nephew, Patrick Ringstad, and cousins. A memorial service will be held at 3 p.m. Saturday, September 12, 2020 at Olson Funeral Home, Fergus Falls. Due to COVID regulations, attendance is limited to 60 and masks are required. A live stream video will be available. Please refer to the Tribute Wall for an invitation to the Live Stream. Arrangements are provided by the Olson Funeral Home in Fergus Falls. Online condolences may be sent to www.olsonfuneralhome.com

The family of Stephen Carter created this Life Tributes page to make it easy to share your memories.