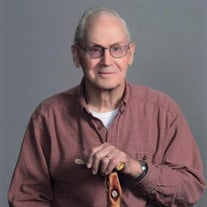 Stanley Edward Jensen 91, of Fergus Falls, died peacefully on June 9, 2020. He was born on August 8, 1928, to George F and Dorothy (Dauner) Jensen, in Hawley, Minnesota. His birthday when he turned 80 was on 08-08-08 and was a special celebration with family and friends. He attended school in Hawley until the eighth grade, when World War II broke out and he had to stay home and help on the farm while his older brothers went to war. Stan was proud to finish his GED in 1967 and encouraged his children to complete their education. He enlisted in the army at age 18 and was deployed to the Korean conflict. He was proud to be a veteran, member of the Chosin few and survivor of the Battle of the Chosin Reservoir. During his time in the war, letters from home which he kept in his vest pocket saved his life. He also saved the lives of many others with his almost 30 gallons of blood donated over 40 years, and was honored by the American Red Cross as one of their top donors. After returning from the war, Stan moved back home to the farm in Hitterdahl, but often visited his older brother Ernie in Wendell. On one of those visits, he met the love of his life, Arlene Katherine Miller, in Fergus Falls. They married on January 22, 1954, through the years that marriage was blessed with two sons and three daughters. Stan started a dairy farm, just south of Fergus Falls, where youngest son Mark and family still reside today. Stan had several jobs off the farm, including the sugar beet plant in Moorhead and worked 22 years at the Regional Treatment Center in Fergus Falls. He loved to mow, keep the yard beautiful and planted many trees, including a favorite Black Walnut tree that he started from seed. Work was a big part of Stan’s life, but he also enjoyed trips to their cabin at Lake of the Woods, fishing, bear hunting, and deer hunting in Maplewood near where Arlene grew up. Family was important to Stan and all of his grandchildren felt special and loved staying at their grandparent’s house. Some of the favorite things about Gramma and Grampa Jensen’s farm were the food, the garden, playing in the yard, and games with the cousins. Grampa was a foodie and loved Gramma’s cooking – we all did! There were always cookies and a pie or two waiting for company. Although Grampa did not have a chance to talk a lot, (Gramma was a gifted conversationalist) you always knew where he stood on any subject. After Arlene passed from cancer in 2015, Stan visited her grave daily until driving became difficult. Stan spent his later years at Mill Street Residence and most recently at the MN Veteran’s Home in Fergus Falls. Stanley was preceded in death by his beloved wife, Arlene; his parents, George F. and Dorothy Jensen; brothers, Chester, Joe, Ernie, and Howard, and sisters, Lenora and a still born sister. Also, son-in-law Gary Foltz who was tragically lost too young in 2001. He is survived by his children, Terry (Pam) Jensen of Underwood, Janelle (Craig) Scheidecker of Fergus Falls, Julie Foltz of Grand Forks, Lori (Rollie) Mann of Battle Lake, and Mark (Lori) Jensen of Fergus Falls; grandchildren, Katie (Chase) Johansen, Allyson (Isaiah) Jensen, Madolyn Jensen, Joe (Beth) Scheidecker, Adam Scheidecker, Holly Foltz, Garrett Foltz, Brianna Mann, Richie (Kat) Mann, Jessie (Jay) Mark, and Amanda Jensen; great-grandchildren, Cash Johansen, Ava and Lily Scheidecker, Ever Mann, Abby, Sophia, and Makayla Trosdahl, and Clara, Maggie, Jaynie, and Henry Mark, and also numerous nieces and nephews. Memorials are preferred to Fergus Falls Minnesota Veteran's Home or to the Fergus Falls V. F. W. Post 612 Color Guard. A private family graveside service will be held. Clergy: Pastor Giovanni Ramos Arrangements are provided by the Olson Funeral Home in Fergus Falls. Online condolences may be sent to www.olsonfuneralhome.com

Stanley Edward Jensen 91, of Fergus Falls, died peacefully on June 9, 2020. He was born on August 8, 1928, to George F and Dorothy (Dauner) Jensen, in Hawley, Minnesota. His birthday when he turned 80 was on 08-08-08 and was a special celebration... View Obituary & Service Information

The family of Stanley Jensen created this Life Tributes page to make it easy to share your memories.