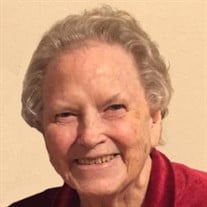 Shirley June (Nelson) Brenaman, 90, a resident of Fergus Falls, died March 18, 2020 at PioneerCare in Fergus Falls, MN. On June 6, 1929, in Omaha, NE at the home of Mary Ethel (Smith) Nelson and John Nels Nelson, a baby girl arrived. They named her Shirley. She attended Benson West Grade School and Benson High School graduating in 1947. On February 7, 1948 she married Orval Don Brenaman in her parents living room. They started their life together in Omaha and were blessed with their first two daughters, Sharon and Linda. In 1957 the family moved to Chicago, IL because of a job transfer, and in 1959 to rural Underwood, MN. In 1961 Shirley and Orval were blessed again with another daughter, Gail. In 1964, due to Orval’s back injury, a move was made to Omaha. in 1966 they moved back to Underwood, MN and 2016 moved to Fergus Falls. Her joy during that time was spending winters in Arizona, with friends Bill and Kay Hayes. Shirley attended Benson Baptist Church from the time of her birth until moving in 1957. At the age of 12 on May 25, 1941 she committed her life to Jesus and was baptized by Rev. Selby Swift. In 1966 she became a member of First Baptist Church, (now Crossroads) Fergus Falls, MN. She was an associate member of Crossroads Baptist Church, apache Jct., AZ and also attended Basswood Baptist Church, Richville, MN. Shirley’s love of God showed in every aspect of her life; He blessed her with the gift of hospitality and a giving spirit. She opened her heart and her home to missionaries, special guests from Denmark and Japan, summers with nieces and nephews, and 25 years of serving as a foster parent for Ottertail County. Over the years many friends thought of her as an extra mom or grandma and she felt the same way about them. Outside of home, she was always involved and helping in whatever activity was available at church, cooking at Camp Joy Bible Camp, and caring for friends and neighbors. She wrote endless letters and cards of encouragement. She was a prolific picture taker that was evident in the 60 photo albums chronicling her 90 years of life. After collecting recipes of family and friends for years, she compiled and published a family cookbook, following it with 3 more updated editions. She loved to bake, plan parties, swim, read, travel, play games, and spend time with family and friends. Preceding her in death were Orval Brenaman her husband of 69 years, 11 months and 18 days; her parents, John and Mary (Ethel) Nelson; brothers, Jack Nelson and Art Nelson, and grandson, John Lerfald. Survivors include her three daughters, Sharon Chapman of Dilworth, MN, Linda (Dave) Lerfald of Underwood, MN, Gail (Mike) Maahs of Underwood, MN; 10 grandchildren, 16 great-grandchildren, 3 great-great grandchildren; sister, Marilyn Carruth of Omaha, NE; brother, Harry (Judy) Nelson of Loveland, CO; several nieces and nephews, and wonderful lifelong friends. A memorial service will be held at a later date. There will be a family graveside service 2:00 p.m. on Saturday, June 20, 2020, at Silent Vale Cemetery, Maine, MN. Assistance provided by the Olson Funeral Home in Fergus Falls. Online condolences may be sent to www.olsonfuneralhome.com

The family of Shirley Brenaman created this Life Tributes page to make it easy to share your memories.