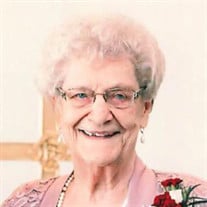 Shirley Mae Brandt, 85, of Little Falls, formerly of Fergus Falls, passed away at her daughter’s residence on February 1, 2022. Shirley Mae Jensen was born September 12, 1936, to Raymond and Alice (Sweesy) Jensen in Morgan, MN. She was confirmed at Bethel Lutheran Church in Morgan. She attended country school and graduated high school in Redwood Falls in 1955. On December 15, 1957, Shirley married Jack Brandt at Gloria Dei Lutheran Church in Redwood Falls, MN. Jack was stationed in Amarillo, TX, where their daughter Shari was born in 1960. After Jack’s discharge from the Air Force, the family moved to Canby, MN where their son Randy was born in 1962. In 1964 Jack was hired by Otter Tail Power and the family made the move to Fergus Falls where their daughter Denise was born in 1970. She was a homemaker and mother and enjoyed belonging to TOPS, and several bowling leagues. Shirley loved children and from her early years babysitting for local families during her high school years to later on she babysat for several families in the Fergus Falls area, including her own grandchildren. After Jack’s death in 2001, Shirley sold the farm and moved into town in 2002, where she made many friends from her time at the Sheridan House and being a member at the noisy table, to discovering Wii bowling. She was the activities director at Riverbend, which she enjoyed. She was also their decorator extraordinaire for all of the holiday events, she had a flare for parties and making life fun. She was so proud when the Fergus Falls Daily Journal selected her and did an article on her wedding dress. Two of Shirley’s favorite things were getting her hair and nails done. After Shirley’s stroke, she went to live at PioneerCare where she was still able to enjoy her beloved Wii bowling. She enjoyed seeing all of the grandchildren, birthday and graduation celebrations. Shirley is survived by her children, Shari (Jon) Hanson of Little Falls, Randy Brandt of Fergus Falls, and Denise Skinnemoen of Underwood; grandchildren, Stephanie Haukos (Jeremy) of Foxhome, Nathan (Molly) Gadow of North Porte, FL, Justin (Ginny) Hanson of Ottertail, Mandie Hanson of Nashville, TN, Alisha (Chris) Ball of Dodge Center, MN, Brooke (fiancé Nathan Springer) of Elbow Lake, and Shelby (Adam) Hyatt of Deer Creek; great-grandchildren, Rylee, Morgan, and Lila Haukos, Connor and Mia Gadow, Payton and Veronika Hanson, Kara, Georgia, and Jaylen Ball, and Piper Mae Springer; sons-in-law, Keith Pederson of Underwood and Kevin Skinnemoen of Wendell; sister, Salona McCotter of Vandemere, NC and Madelyn Bronson of Cold Spring; sisters-in-law, Verna (Dick) Nelson of Fergus Falls and Laura Pederson of Glencoe, and several nieces and nephews. Shirley was preceded in death by her parents; husband, Jack; brother, Gene Jensen; brothers-in-law, John Bronson and Bob Harthun; sister-in-law, Connie Harthun; nephews, Steven Harthun and Paul Bronson, and nieces, Stacy Underhill. Special thank you to Shari Dybel of Friendly Faces who became mom’s senior companion. Memorial Service: 1:00 p.m. Saturday, February 12, 2022, at Olson Funeral Home in Fergus Falls, with visitation one-hour prior to the service at the funeral home. Clergy: Reverend David Strom Interment: Bethlehem Cemetery, Fergus Falls, MN Arrangements provided by Olson Funeral Home in Fergus Falls. Online condolences may be sent to www.olsonfuneralhome.com

Shirley Mae Brandt, 85, of Little Falls, formerly of Fergus Falls, passed away at her daughter&#8217;s residence on February 1, 2022. Shirley Mae Jensen was born September 12, 1936, to Raymond and Alice (Sweesy) Jensen in Morgan, MN. She was... View Obituary & Service Information

The family of Shirley Brandt created this Life Tributes page to make it easy to share your memories.