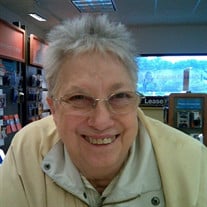 Sharon Zumwalde of Jewett Lake in Otter Tail County, MN, passed away Jan. 15, 2021 after many months of battling multiple medical issues. She fought hard, always with family nearby or on a video chat. Ultimately, these medical issues overcame her. Sharon was born February 22, 1939, to George and Gladys (Beck) Earl in Juhl, MI. She attended Marlette High School in Marlette, MI, graduating in 1957. She then attended Grace School of Nursing, earning her RN in 1960, and worked as a nurse in Detroit, MI. On May 11, 1963, Sharon married Joseph John Zumwalde in Detroit, MI, and Sharon later left nursing to start and raise their family. She followed her husband Joe in his naval career that took them to assignments in San Diego, Hawaii, the Pentagon, and Cuba, before concluding his career at the Naval Recruiting station in Fargo, ND. Sharon later went back to school to be recertified as a RN and returned to work in the health field in Moorhead and later in Fergus Falls, MN after moving to Jewett Lake. Sharon has also held positions at NW Mutual in Fargo, and Nelson Ford and Otter Tail Credit Union both in Fergus Falls. Sharon loved her family, her home on Jewett Lake and watching golf and football – the Minnesota Vikings, Detroit Lions, and North Dakota State University Bison. Sharon was also a gadget gal, always interested in the latest technology. If there was a new widget or wingding, she wanted it. And Sharon was the self-proclaimed straw boss, always generous with advice on all matters, advice that will now sorely be missed. If love could have saved you, you would live forever. Sharon is survived by her daughters, Patricia (Roger) Lewis and Kathleen (David) Wahlberg; son, William (Linda) Zumwalde; grandchildren, Nicholas (Karis Hamilton) Lewis, Kyle (Savannah Thompson) Wahlberg, and Mallory (TJ Goulet) Shuck. Sharon is also survived by six great-grandchildren, Bowen, Harper, Taitym, Dalton, Berkley, and Sutherlyn. Sharon was preceded in death by her husband, Joseph; brother, Robert Lee Earl, and great-granddaughter, Averee. A private gathering of immediate family will be held and then a larger celebration of life will be held at a later date. Please refer back to the funeral home website and Sharon’s Tribute Wall for a recording of the service on Friday, February 5, 2021. Public Walk-through Visitation: 4:00 p.m. to 6:00 p.m., Thursday, February 4, 2021 at the Olson Funeral Home in Fergus Falls. Clergy: Father Alan Wielinski Interment: St. Joseph Cemetery, Moorhead, MN Arrangements are provided by the Olson Funeral Home in Fergus Falls. Online condolences may be sent to www.olsonfuneralhome.com

Sharon Zumwalde of Jewett Lake in Otter Tail County, MN, passed away Jan. 15, 2021 after many months of battling multiple medical issues. She fought hard, always with family nearby or on a video chat. Ultimately, these medical issues overcame... View Obituary & Service Information

The family of Sharon Zumwalde created this Life Tributes page to make it easy to share your memories.