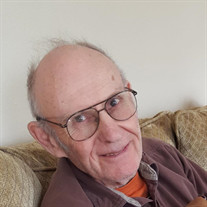 Sharold Reynolds, 82, of Fergus Falls, died Saturday, February 19, 2022 at the Fargo VA Medical Center. He was born on July 5, 1939 in New York Mills, MN to Marlin & Elsie (Pernula) Reynolds. He attended school in Fergus Falls, MN graduating in 1958. During his high school years, he was a member of the Fergus Falls Boxing Club, which his father started. Sharold made Golden Glove champion 5 times from 1956-1959. Also, during this time, he helped his dad with the family gravel/black dirt business. He served in the US Navy from 1959-1963 and was stationed in Patuxent River, MD. On leave he met his future wife, Martha Whedbee. They married in Little Falls, MN on September 21, 1963. The couple made their home in Fergus Falls, where they raised 3 daughters and Sharold worked on the road as a heavy equipment operator for Hodgman & Sons. In 1971 he was certified in reflexology, where he practiced privately. Sharold then began working at Fergus Falls Monument Company. He took over his dad’s gravel/black dirt business in 1981, alongside working as a security patrol officer and a bus driver for Ottertail Coaches. He left the family business in 1995 due to heart issues and continued driving school bus, retiring in 2000. Sharold was a member of the Elks club, Clown club and the Fergus Falls Seventh Day Adventist Church. He loved making people laugh by telling jokes. He enjoyed trips to the casino, attending local boxing events & watching boxing with his friends on the big screen. He looked forward to visiting with friends at the Viking Café, watching western movies and reading Louis L’Amour books. As his grandson would say, “Sharold was a collector of everything”. He took many road trips finding and selling the best treasures, and enjoying vacations with family! He was proud of his family and enjoyed spending all the time he could with them. He was the whisperer of all animals- having skunks, racoons, deer, squirrels, cats and dogs throughout his life! He was an honest, dedicated, hardworking, funny, stubborn Finlander, who will be greatly missed. Preceding him in death: his wife Marty, sister Sharon, nephew, David and parents Elsie & Marlin, along with many close friends. Survivors include his daughters, Tonya Haugen, Tiffany (Wes) Reynolds, Tara Reynolds; grandchildren, Breanna Haugen, Brady Phillips and Aaron Haugen, many grand dogs and one tiger cat; along with many nieces, nephews, cousins, and friends. In lieu of flowers, memorials may be directed to the CLC at the Fargo VA Hospital. Visitation: One hour prior to the service. Memorial Service: 1:00 p.m. Friday, March 4, 2022, at Olson Funeral Home in Fergus Falls. Clergy: Chaplain Obie Madison Jr. Interment: Knollwood Memorial Gardens, Fergus Falls, MN at a later date Arrangements provided by Olson Funeral Home in Fergus Falls. Online condolences may be sent to www.olsonfuneralhome.com

The family of Sharold Reynolds created this Life Tributes page to make it easy to share your memories.