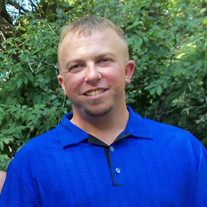 Shane Herk, 40, of Dent, MN, died Saturday, November 27, 2021, at his residence. Shane Allen Herk was born on February 24, 1981, to Cameron (Lisa) Herk and Lori (Paul) Rinke-Jorgenson, in Detroit Lakes, MN. He was baptized at Zion Lutheran Church in rural Pelican Rapids, MN and was confirmed at Hamar Lutheran Church, Rothsay, MN. Shane graduated from Rothsay High School in 1999 and attended NDSCS Tech School in Wahpeton, ND for a brief period following graduation. At age 18, he became a Union Member in the Pipeline Industry. He used the same drive, wit, and determination, that he always used to tackle any situation in life, and rose to the top of his field becoming a Bending Engineer in 2010. He was well liked and respected amongst his colleagues, and was affectionately known as “Junebug.” There were some of his colleagues that didn’t even know he had a first name. After 10 years of being together, Shane married ReAnna Wischnak on October 12, 2010, in Gillette, WY. Together they had three beautiful children, Nolan (10), Kendra (7), and Sadie (5). As a family they would travel all across the country to Shane’s various job locations. Once the kids started school, ReAnna stayed back at home in Minnesota with the kids, but would again join Shane during the summer months. Shane loved his family very much, and those three kids were the light of his life. He also enjoyed fishing and hunting. Shane was a kid at heart, which is what led him to his real passion… “Avid Collector” of just about anything that would/could potentially turn him a profit. He was always buying toys and games for the kids that they could enjoy together. Shane was very charismatic, always smiling and laughing. His energy was infectious and he would quickly become the center of attention as soon as he entered the room. He had a unique sense of humor that was like no other…Shane was Shane! He was so very loved, and will be greatly and deeply missed. Preceding him in death were his grandparents, Roger and Wannetta Rinke, Fran Swenson, Yvonne Herk, Elaine Kjonaas, and Edward Jorgenson. Shane is survived by his Wife and Children; his Parents and Step-Parents; Siblings - BreAnn (Jerry) Rosenthal, Bryce (Taylor) Jorgenson, Jarod Herk; Step-Siblings - Erin (Jayme) Guck, Erica LaForge, and Adrean LaForge; Grandparents, Dan Herk, Wally Swenson, and Doris Jorgenson; many special Aunts, Uncles, Nieces, Nephews, Cousins, and friends, and his life-long Best Friend, Nick “Pep” Fosse. ~ Blessed be the memory of Shane Allen Herk ~ Memorial Service: 2:00 p.m. Saturday, December 4, 2021, at Zion Lutheran Church of Franklin Lake, Pelican Rapids, with visitation one-hour prior to the service. Clergy: Reverend Salim Kaderbhai Assistance provided by the Olson Funeral Home in Fergus Falls. Online condolences may be sent to www.olsonfuneralhome.com

The family of Shane Herk created this Life Tributes page to make it easy to share your memories.