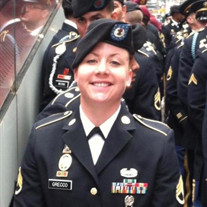 SFC. Michelle Ann Grecco, 35, of Minneapolis formerly of Wahpeton, lost her life by suicide on Saturday, July 18, 2020. Michelle was born May 17, 1985, in Philipsburg, NJ to Joseph P. Grecco and Cary Ann (Johnson). Michelle started playing hockey in Wahpeton beginning in fifth grade. She was part of the first North Dakota State girl’s hockey tournament in 1998. She graduated from Wahpeton High School in 2004. Michelle was awarded a Hockey Scholarship to Chatham University in Pennsylvania and attended there for two years. She enlisted in the United States Army on July 8, 2006. After her basic training she attended Intelligence Training at Fort Huachuca. As an Intelligence Analyst, she served deployments in Korea, Iraq, The United States, and Germany. She was awarded the Army Commendation Medal, Meritorious Service Medal, Army Achievement Medal, Meritorious Unit Emblem, and the Combat Action Badge. While in the Army, she graduated Summa Cum Laude from Mercy College in New York with a Bachelor of Science degree in Organizational Management. While stationed in The Bronx, NY, she met Marina Rosado, with whom she shared a relationship spanning more than ten years and taking them from Hawaii to Wiesbaden, Germany. Michelle had a charismatic and exuberant personality and no mater where she traveled or was stationed, she positively influenced people’s lives. She was happiest spending time with family and friends and being on the ice. She continued to play hockey in all locations in which she served while in the Army. She also loved the quiet of her grandfather’s dock on Ottertail Lake. She was known as Auntie Michelle to many children in her life, with whom she created instant bonds, and she was always right alongside them making messes. Michelle wore her heart on her sleeve and always wanted to spread love wherever she could. She wanted to be part of the change. She will be forever in our hearts and missed by her partner, Marina Rosado; her parents, Cary Ann and step-father, John Juvrud; sisters, Amy Lee, Amber Lynn Grecco (Justin Danbury), and Angela Grecco; brothers, Joey and Jacob Grecco; nephew and fellow hockey player, Max Grecco; nieces, Brooklyn and Vivian Danbury; grandparents, Sherman and Shirley Johnson; uncle, Jay Johnson; aunt, Kay (Troy) Fhyre; cousins, Jordan and Hanna Grimsrud; many Grecco aunts, uncles, and cousins, and her beloved cat, “Camo.” She was preceded in death by her father, Joseph P. Grecco; grandmother, Beverly Ann Johnson, and grandparents, Angelo and Rita Grecco. In lieu of flowers, the family requests that a donation be made in Michelle’s memory to TAPS, the Tragedy Assistance Program for Survivors at their website https://www.taps.org/ or God’s Acres of Zion-Amor Lutheran Church. Public Walk-through Visitation: 5:00 p.m. to 7:00 p.m. Friday, July 31, 2020 at the Olson Funeral Home in Fergus Falls, Minnesota. A private family Celebration of Michelle’s Life will be held on Saturday, August 1, 2020 with Livestream at 10:30 a.m. Please refer to the website for a link to the Livestream. Interment: Zion-Amor Lutheran Cemetery, Amor, Minnesota Arrangements entrusted to the care of Olson Funeral Home in Fergus Falls, Minnesota. Online condolences may be sent to www.olsonfuneralhome.com

The family of SFC. Michelle Ann Grecco created this Life Tributes page to make it easy to share your memories.