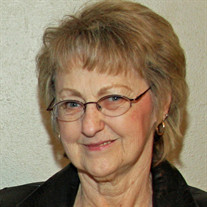 Sandra “Sandi” Kay Torgerson, 73, a resident of Battle Lake, passed away Saturday, June 2, 2018, surrounded by her family at Fairview-University Medical Center in Minneapolis. Sandi was born on October 21, 1944, to Donald and Dory (Donley) Wilson, in Tacoma, WA, where she grew up. She was united in marriage to Larry Torgerson on March 7, 1964, where she went from a city girl to farming with Larry and his brother and wife on their dairy farm near Underwood, MN. She also worked in Battle Lake at the dental office and Stub’s. Sandi devoted many years of her life caring for others from working at the Otter Tail Lake Group Home, Perham Home Health and Good Samaritan in Battle Lake, where she retired from in 2015. She always put others first before herself. Sandi had many struggles in her life. She lived with diabetes for 55 years. When she lost her sister, Linda in 1991, this was very hard on her. Sandi watched and prayed over Linda’s children, Ronda and Rodney as if they were her own. Sandi loved spending time with her grandchildren and great-grandchildren. They were the light of her life. She loved reading her Bible, sewing, gardening, shopping and she really enjoyed going for rides in their convertible with her husband, Larry. We are so proud to call her our wife, mother, grandmother, great-grandmother, sister, aunt, and friend. Preceding her in death was her father, Donald Wilson; mother, Dory Johnson; and sister, Linda Stanley. Survivors include her husband of 54 years, Larry Torgerson; daughter, Lisa (Randy) Lien; grandsons, Joshua (Jena) Nagel, Dustin (Val) Nagel, Dylan (Elly) Lien; great-grandchildren, Jaden, Kelcie, Tucker, Lily, Kinsley; sister, Cindy (Cliff) Allen; brothers, Scott (Carm) Wilson, Rick (Joanne) Zahnow; step-dad, Larry Johnson; along with many nieces and nephews. Visitation: One hour prior to the service at the funeral home Service: 1 p.m. Friday, June 8, 2018, at Olson Funeral Home Chapel in Fergus Falls Officiants: Scott Wilson and Rick Zahnow Arrangements are provided by the Olson Funeral Home in Fergus Falls Online condolences may be sent to www.OlsonFuneralHome.com

Sandra &#8220;Sandi&#8221; Kay Torgerson, 73, a resident of Battle Lake, passed away Saturday, June 2, 2018, surrounded by her family at Fairview-University Medical Center in Minneapolis. Sandi was born on October 21, 1944, to Donald and... View Obituary & Service Information

The family of Sandra K. Torgerson created this Life Tributes page to make it easy to share your memories.