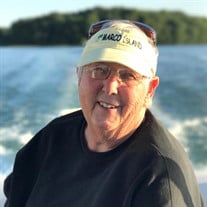 Sandra (Sandy) J. Laub, “Nana”, former resident of rural Clitherall, Minnesota died on February 8, 2021. She was born on January 14, 1936 in Omaha, Nebraska to William H. Hall and Clara (Erxleben) Hall. She grew up to be a strong, independent, and vibrant woman, nurtured by her incredible family and network of friends. She often shared fond memories of trips to the Omaha stockyards with her dad, crazy adventures with her beloved brother Bill, and her passion for both dogs and horses, which she showed competitively. From the time that she was twelve years old, her career goal was to become a nurse. Sandy graduated from the University of Nebraska Nurses Training Program in 1958 and went on to dedicate a large portion of her life to this profession, often receiving marriage proposals from patients along the way (she was that good!). Never afraid to try anything new, she joined North Hennepin Community College as a Nursing Instructor in 1972, where she primarily focused on Pediatric care for 14+ years. During that time, she often worked multiple jobs, raised her family, ran the household, and still managed to be the life of the party wherever she went. During the latter part of her career, she became the self-appointed CEO of The Little Red Sled with her husband of 50 years, Hank, and awesome son, Matt. They had many adventures together traveling cross-country, hitting the craft show circuit in its glory days and setting up shop at the Minnesota Renaissance Festival for another 14+ years. Sandy cherished any and all time spent with family and friends, summers on Clitherall Lake, sailing her Sunfish sailboat, porch swing chats, yummy food, good books, special mother-daughter quests with Laura and knitting baby hats and blankets for those in need. She will be forever famous for her lasagna, special Nana salad, tuna mac salad and pickles. She passes on her legacy to her daughter, son, and twin granddaughters, whom she loved more than life itself. She was Nana to all and made sure that everyone knew that Nanas can do whatever they want, and she did. Sandy will forever be remembered for her authenticity, charisma, positive spirit, storytelling, sense of humor, and one-of-a-kind sparkle. Just hearing her voice or seeing her smile made all feel welcome, special, and loved. She was preceded in death by her husband, Henry C. Laub. She is survived by her children Laura (Rick) Wassenaar of Duluth, and Matt Laub of Clitherall; two grandchildren, Emily Wassenaar (Kevin Stocke) and Jenna Wassenaar (Drake Cox) of St Paul and granddogs, Max, Benny, and Pickles. The family would like to thank the doctors and staff of the Lake Region Healthcare Hospital in Fergus Falls for their quality care, attentiveness, and compassion. A private celebration of life will be held at a future date. Arrangements are provided by the Olson Funeral Home in Fergus Falls. Online condolences may be sent to www.olsonfuneralhome.com

The family of Sandra Laub created this Life Tributes page to make it easy to share your memories.