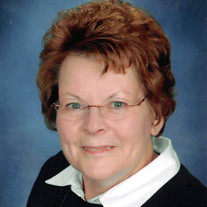 Sandra “Sandy” Edwards, 66, of Fergus Falls, MN passed away peacefully surrounded by her loving family on Thursday, February 8, 2018 at Sanford Hospital in Fargo, ND. Sandy was born in Minot, ND on March 24, 1951 to Arthur and Lois (Sande) Misemer. She was baptized in the Methodist Church and continued her spiritual growth by attending Sunday school, later becoming confirmed. As a child she moved with her family to various towns in North Dakota and also in Fergus Falls as her dad was a salesman. Sandy always had a strong work ethic and at 17 began her career as a caregiver at the Boulder Developmental Center in Boulder, MT, caring for those with developmental disabilities. She returned to her North Dakota roots and purchased her first car, a 1965 Ford Mustang of which she was very proud. She began working at Bethany Homes in Fargo which further confirmed her desire to care for others. This led to her pursuing a degree through the Nursing Program at NDSU while she continued to work at Bethany Homes and St. John’s Hospital in Fargo. While in school she met and married the love of her life, Dan Edwards, on June 2, 1973 in Moorhead, MN in the wedding dress she had made for herself. They began their married life living in Fargo, ND as they both continued to attend NDSU. Sandy graduated in 1975 with an Associate’s Degree in Nursing and passed her State Boards to become a Registered Nurse in the summer of 1975. Sandy worked as an RN at the Fargo VA Hospital and St. Ansgar Hospital (Moorhead) until she and Dan started their family. She put her nursing career on hold to focus on being a stay-at- home mom to Jessica & Jason. In 1982 the family moved to Fergus Falls and then welcomed their 3rd child, Jackie. Sandy was a loving and devoted mother and always put her children’s needs before her own. When her youngest child began school, Sandy returned to her nursing career. She began working at Lake Region Hospital in Fergus Falls as an RN and during that time received a Gerontology Certification as part of her continuing education. Her experience and knowledge made her a valuable asset due to her ability to work anywhere in the building, including the ICU, Medical and Surgical floors, as well as LRH’s Skilled Nursing Facility. She was always mindful of balancing her work schedule with the needs of her family. She often worked the night shift so she could be home to see her kids off to school and be there when they returned home. After 23 years of dedicated service to LRH she found a calling to Parish Nursing, where she could continue using her nursing education and share the love of the Lord. Sandy began working as a Parish Nurse at Bethel Lutheran Church in 2013, after completing coursework through the Concordia College Parish Nursing Program. She continued to work at Bethel until the time of her passing. She was loved by the congregation and praised for her ability to show compassion and care to all, inspiring others to do the same. Family was the most important thing in the world to her and she enjoyed attending her children’s sporting events (cross-country, track, hockey and cheerleading) while they were in high school and college. She enjoyed baking and sharing goodies with others. Her famous Special K Bars won her several blue ribbons at the Ottertail County Fair. Sandy also enjoyed working as an Election Judge for many years, becoming a Head Judge. She was a member of the Minnesota Nurses Association, the LRH Nurse’s Union (serving as a steward and on the contract negotiation team), VFW Auxiliary and Daughters of Norway (Solheim Lodge in Butte, MT). She was preceded in death by her parents, Arthur and Lois (Sande) Misemer and father and mother-in-law, Rolland and Ella Mae (Becker) Edwards. Sandy is survived by her loving and devoted husband of 44 years, Dan; children Jessica (Clarence Jr.) Nelson of Portland, ND, Jason (Kathy) Edwards of Fargo, ND and Jackie (Dale) Kraling of Mayville, ND; grandchildren Alex and Teri Nelson, Kemper, Bergen and Maylen Edwards and Tucker Kraling; siblings Wes (Lonnie Martin) Misemer of Anchorage, AK, Ray Misemer of Elbow Lake, MN, Cheryl (Myron) Wegley of Butte, MT, Jan (Steve) Sell of Fargo, ND and Julie Brandon of Fargo, ND; Sister-in-law Louella (Gordon) Hirsch of Falcon Heights, MN along with nieces and nephews Kim, Kara, Kelsey, Beth, Erik, Kyle, Emily, Joe, Lexi and Will. Blessed be the memory of Sandy! Visitation: 5-7 p.m. Monday, February 12, 2018, with a 7 p.m. public prayer service, at Bethel Lutheran Church in Fergus Falls, and resumes one hour prior to the service at the church. Service: 11 a.m. Tuesday, February 13, 2018, at Bethel Lutheran Church in Fergus Falls Clergy: Reverend Ed Monson and Reverend David Foss Interment: Oak Grove Cemetery, Fergus Falls, MN

The family of Sandra "Sandy" Edwards created this Life Tributes page to make it easy to share your memories.