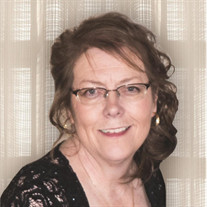 Sande (Sandra) L. Silver, 60, of Fergus Falls, MN, formerly of Glenwood, MN, left this earth on November 26, 2021, to start her next journey as an Angel to her loved ones. Sande had a courageous 2nd battle with brain cancer during her time at PioneerCare in Fergus Falls. Sande was born September 3, 1961, in Warren, MN to Clarence and Elizabeth (O'Keefe) Jadeke. She attended Bay View Elementary in Proctor, MN and graduated from Marshall County Central High School in 1979. She furthered her education at Northland Technical College in Thief River Falls, MN and graduated in 1982. In August of 1986, Sande married Randy Silver in Alexandria, MN and they began their life together for 30 years. She was employed as a beautician and then as the secretary at Sacred Heart Church until her 3 children were born. She then stayed home and raised her children while volunteering in their classrooms daily for many years. Being home with her children was something Sande was so proud of. Sande was a devoted Catholic of Sacred Heart in Glenwood, a Girl Scout Leader for nearly 10 years, and volunteered weekly at the local food shelf in Glenwood. In Fall of 2018, Sande decided to move to Fergus Falls to be closer to her granddaughter, Lilly. She became a member of Our Lady of Victory Catholic Church in Fergus Falls. Her faith was something to be admired by all. She enjoyed spending time with her granddaughters, Lilly Ann and JoAnna Jean, up until her last minutes here on Earth. She was at peace knowing she was going to their guardian angel. She is preceded in death by her parents; sister, Linda Howden; and brother, Robert Jadeke. Sande is survived by her children, Elizabeth (James) Rogholt of Fergus Falls, Thomas (Kaitlyn) Silver of Glenwood, and Michael Silver of Glenwood; the light of her life granddaughters, Lilly Rogholt and JoAnna Silver; sister, Karla (Donn) Hoffelt of Williston, ND, half-sister, Terri (Gary) Beckwith of Thomson, MN and half-brother, Rich (Alisa) Jadeke of Otsego, MN; and many nieces and nephews. The family would like to thank PioneerCare, LB Hospice and Knute Nelson Hospice for their endless heartfelt care of Sande during the last 17 months. Visitation: 5-7 p.m. Thursday, December 2, 2021 at the Olson Funeral Home, Fergus Falls, MN. Mass of Christian Burial: 11 a.m. Friday, December 3, 2021 at Our Lady of Victory Catholic Church, Fergus Falls. Clergy: Father Alan Wielinski Burial: 2:30 p.m., Sacred Heart Catholic Cemetery, Glenwood, MN Arrangements provided by the Olson Funeral Home in Fergus Falls.

Sande (Sandra) L. Silver, 60, of Fergus Falls, MN, formerly of Glenwood, MN, left this earth on November 26, 2021, to start her next journey as an Angel to her loved ones. Sande had a courageous 2nd battle with brain cancer during her time at... View Obituary & Service Information

The family of Sande (Sandra) Silver created this Life Tributes page to make it easy to share your memories.