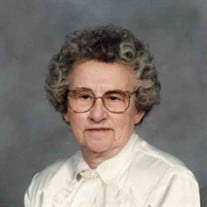 Ruth Valdine Hanson, 98, of Fergus Falls, died peacefully at PioneerCare Center in Fergus Falls, Monday, March 30, 2020, under the care of LB Hospice. Ruth was born December 4, 1921, at home in Aastad Township, the oldest child of Anton and Valdine (Skyberg) Hanson. Ruth was baptized and confirmed at Aastad Lutheran Church and attended rural school through the 8th grade. After graduating from Fergus Falls High School in 1940 and working at various jobs, she felt the call to the Mission Field. Ruth attended Lutheran Bible Institutes in Minneapolis and Seattle, earning her teaching degrees and also in Los Angeles where she received her Missionary Medical Degree in Nursing. Feeling the call to Foreign Missions, Ruth was commissioned in 1954 at Aastad Lutheran Church under the World Mission Prayer League. The next 32 years were spent in West Pakistan as a Missionary Nurse and School Teacher. Retiring from the Mission Field in 1986, she returned to Fergus Falls and lived at Riverview Heights. Ruth was an active member of Bethel Lutheran Church. She enjoyed speaking and sharing her many pictures and experiences of her life while on the Mission Field. She was preceded in death by her parents; sisters, Lucille (Howard) Albjerg, Kathryn (David) Thoreson; brothers, David Hanson, Richard (Beverly) Hanson, Victor (Lenora) Hanson, and brother-in-law, Lorain Gehrke. Ruth is survived by one sister, Dorothy Gehrke of Campbell; two brothers, Lyle (Romelda) Hanson of Moorhead and Eugene (Myrna) Hanson of Dalton, and 23 nieces and nephews. Her family is truly greatful for the care given to Ruth at PioneerCare Center for the past six years. A private family graveside service is being held at Aastad Cemetery, rural Fergus Falls. Arrangements are provided by the Olson Funeral Home in Fergus Falls. Online condolences may be sent to www.olsonfuneralhome.com

The family of Ruth Valdine Hanson created this Life Tributes page to make it easy to share your memories.