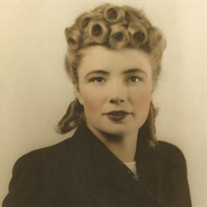 Ruth H. (Lee) Drexler, a lifelong resident of the Herman-Norcross area, died Sunday, May 19, 2019, at the Evansville Care Center. Ruth was born October 18, 1920, to Wayne E. and Mabel M. (Flakker) Lee. She was the oldest of eight children. Ruth graduated high school in Herman, Minnesota at age sixteen and then completed Teachers’ Normal Training in Wheaton. She taught grades seven through nine in Hoffman and all grades in one-room schoolhouses near Hoffman, and Norcross. Later in life she returned to work as a teachers’ aide and felt a sense of accomplishment helping students learn to read. On January 26, 1953, she was united in marriage to Elmo Drexler. They had one son, David. While Elmo and his brother, Dal, operated a small family farm with dairy, grain, and livestock, Ruth was a homemaker. Beginning in 1960s she became the area’s ‘Avon Lady’ and served in that role for more than 40 years. Ruth received Christ as her savior and spent much of her life sharing her faith with family and friends. She was, for many years, active with the Sunday School and Vacation Bible School programs at Grace Free Church in Elbow Lake. Ruth’s home was always open. She had a gift for hospitality and was pleased that her home provided many people a “port in the storm”. She is survived by one son, David (Theresa) Drexler of Norcross; one foster son, her cousin, Duane (Pat Corbett) Cartier of Minneapolis; one sister, Nancy (Marvin) Carlson of Coon Rapids; one brother, Richard (Sue) Lee of Vancouver, WA; sisters-in law: Gloria Lee of Barrett, and Mary Lee of Bismarck, ND; her grandchildren, David Drexler, Lauren (Sam) Quernemoen, Leah Drexler, Olena (Eric) Andersen, Michelle Cartier, Nicole (Michael) Ybarra, and Rebecca Cartier; several great-grandchildren, and numerous nieces and nephews. Ruth was preceded in death by her husband, Elmo in 1985; her parents; brothers Wayne, Delbert, and Jerome; and sisters: Mildred and Marion. Visitation: one hour prior to the service at the church Service: 11 a.m. Thursday, May 23, 2019, at Destiny Church, rural Ashby Clergy: Pastor Steve Quernemoen and Pastor David Drexler Private family interment will be held at the Lakeside Cemetery of Herman Olson Funeral Home, Fergus Falls is in charge of arrangements online condolences may be sent to www.olsonfuneralhome.com

Ruth H. (Lee) Drexler, a lifelong resident of the Herman-Norcross area, died Sunday, May 19, 2019, at the Evansville Care Center. Ruth was born October 18, 1920, to Wayne E. and Mabel M. (Flakker) Lee. She was the oldest of eight children.... View Obituary & Service Information

The family of Ruth Harriet Drexler created this Life Tributes page to make it easy to share your memories.

Ruth H. (Lee) Drexler, a lifelong resident of the Herman-Norcross...