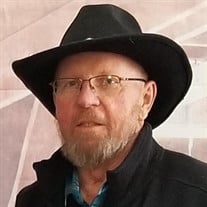 Russell Allen Nelson, 70, a resident of Belle Fourche, SD, formerly of Fergus Falls, MN, passed away July 5, 2021, after a long hard battle with Cancer. Russ was born July 6, 1950, to Charles and Dorothy (Wheeler) Nelson in Fergus Falls, MN. He graduated from Fergus Falls High School in 1968 and went on to attend Wahpeton State School of Science for surveying. Russ met his love, Janet Godel, at a Halloween party in 1966. On October 19, 1967, they were wed in Sisseton, SD. To this union they had three children, Stacy, Tara, and Matthew. These three brought many adventures to their lives. During his life Russ was a dedicated worker. He began his surveying career with Robert Osland and Associates, starting in 1967 and leaving them in 1977. After leaving them he became employed with Ottertail Power Company where he worked for 37 years before retiring in 2014. Russ was a member of First United Church of Christ while living in Fergus Falls. After settling in Belle Fourche, SD they found their church home at Saint John’s Episcopal parish in Deadwood, SD. For many years Russ enjoyed playing softball, bowling, and all things outdoors. He loved being outside camping, hiking, backpacking, and fly fishing with his hand made ties. While out on his many adventures he found his happy place in the Bighorn Mountains, “his heaven on earth.” Jan and him loved making wine together and sharing it with their many friends and family. Russ never knew a stranger and met numerous friends by taking a seat and starting up a conversation. I’m sure the Branding Iron crew can attest to that! He loved all the times spent with family and the many trips to be with them on their special days. (Graduations, weddings, holidays) He was a member of the Pheasants Forever, Rocky Mountain Elk Foundation, NRA, the VFW auxiliary in Deadwood, SD, and the Deadwood Historical Society. He was preceded in death by his parents, Charles and Dorothy Nelson; his brother-in-law, Craig Godel, and his father-in-law, Howard Godel. Russ is survived by his wife, Janet Nelson of Belle Fourche, SD; his children, Stacy (Scott) Kolle of Fergus Falls, MN, Tara (Mark) Manuel of Springfield, CO, and Matthew (Julie Scheer) Nelson of Bloomington, MN; siblings, Stan (Deb) Nelson of Mesa, AZ, LouAnn (Bob) Reger of Dalton, MN, and Gail (Bruce) Kolle of Fergus Falls, MN; grandchildren, Daniel (Kellie) Kolle, Chase (Marcia) Kolle, Maggie (Maitland) Torgusson, Elias Kolle, Samantha Manuel, and Thomas Manuel; great-grandchildren, Prairie and Buck, along with numerous nieces, nephews, and special friends in Minnesota and South Dakota. Visitation: One-hour prior to the service at the funeral home. Celebration of Life: 11:00 a.m. Monday, July 12, 2021, at the Olson Funeral Home in Fergus Falls. Inurnment: Knollwood Memorial Gardens, Fergus Falls, MN. Arrangements are provided by the Olson Funeral Home in Fergus Falls. Online condolences may be sent to www.olsonfuneralhome.com

The family of Russell Nelson created this Life Tributes page to make it easy to share your memories.