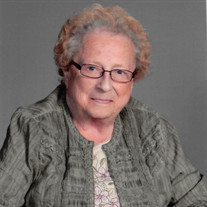 Ruby Lorraine Widness, 93, a resident of Fergus Falls, passed away peacefully Saturday, February 10, 2018, at LB Broen Home in Fergus Falls. She was born on August 20, 1924, on a small farm west of Battle Lake, Minnesota, the daughter of Wilhelm August and Julia (Roen) Wentzel. As a child she attended the Barnhard School District No. 182, north of Underwood, and graduated from Underwood High School in 1942. Her first job at the age of 16, was clerking at the East Lost Lake Store. In addition to the duties of the store, she pumped gas and put oil & antifreeze in cars. She also worked for a family doing housework for $5.00 a week. From her first check she bought a box camera, which she still has. She taught herself how to play the piano and guitar. Ruby would often listen to the radio, write down the lyrics to songs and would play them by ear. On June 20, 1944, she married Orris Christian Widness in Underwood. Orris then went off to war, serving in the Pacific. During that time, Ruby lived with her parents. When Orris was discharged in 1946, he returned to his awaiting wife and daughter, Joyce. In 1948, the family moved to Aurdal Township where they began to farm, retiring from farming in 1968. In 1970, Ruby began working at the Broen Home as a nurse’s aide. She later received her certification from the Fergus Falls Junior College as a Trained Medical Aide, retiring in 1986. Ruby was a faithful and active member of Stavanger Lutheran Church. She was church organist for many years. Ruby also was involved in the Stavanger Ladies Aid, the Stavanger Quilters and enjoyed many outings with her church friends. Ruby was a member of the Fergus Falls VFW Auxiliary, and was the pianist for the “Gospel Lights” musical group. Ruby fulfilled a life-long dream of taking two trips to Norway visiting family, continuing to correspond with them throughout the years. There were many things that she enjoyed such as embroidery, cooking and baking- especially lefse and doughnuts. Ruby enjoyed watching MN Twins baseball, going fishing for sunnies, and loved reading books. She enjoyed nurturing and following her children and grandchildren in their many activities and day-to-day events. Ruby loved Jesus and loved her family as they continued to grow and grow. She blessed us all with her lovely musical abilities, delicious meals and beautiful quilts. Ruby was a strong, spunky lady and full of wit. She will be missed more than words can express. Preceding her in death were her parents; her husband, Orris in 1994; a son, David in 1956; and a half-brother, Berwin Wentzel in 1977. Survivors include five daughters, Joyce (Steven) Yingling of Elk River, Sandra (Glenn Olson) Jonson of Rogers, Kathryn (Scott) Thompson of Hillsboro, ND, Helen (Dean) Erkenbrack of Fergus Falls and Judith (Kevin) Knick of Fergus Falls. Also surviving is a step-son, Herman (Mary) Rubink of Underwood; 15 grandchildren, Sandy Payne, Christine Parr, Ross Yingling, Julie Hoffman, Stephanie Kubitz, Chad Zuehlsdorff, Jessica Zuehlsdorff, Alison Tuil, Ryan Erkenbrack, Jeremy Knick, Nathan Knick, Brittney Holmburg, Mick Moore, Troy Rubink and Wayne Rubink; 34 great and great-great grandchildren; one sister, Adeline Oscarson Holte of Fergus Falls and a brother, Duane (Anna) Wentzel of Underwood. Visitation: 5-7 p.m. Thursday, February 15, 2018, with a public prayer service at 6 p.m., at Olson Funeral Home in Fergus Falls, and resumes one hour prior to the service at the church. Service: 10:30 a.m. Friday, February 16, 2018, at Stavanger Lutheran Church, Fergus Falls Clergy: Reverend John Juhl Interment: Stavanger Lutheran Cemetery, Fergus Falls Arrangements are provided by the Olson Funeral Home in Fergus Falls Condolences may be sent online at www.OlsonFuneralHome.com

Ruby Lorraine Widness, 93, a resident of Fergus Falls, passed away peacefully Saturday, February 10, 2018, at LB Broen Home in Fergus Falls. She was born on August 20, 1924, on a small farm west of Battle Lake, Minnesota, the daughter of Wilhelm... View Obituary & Service Information

The family of Ruby Widness created this Life Tributes page to make it easy to share your memories.