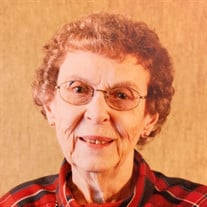 Ruby Lenora Haagenson, age 94, of Fergus Falls, died February 2, 2019, at Park River Estates in Coon Rapids, MN. She was born on December 27, 1924, on the home farm in rural Cosmos Township, Meeker County, MN, one of six children to Roy and Lillie Olson. Ruby was raised on the family farm and graduated from Litchfield High School in 1942. She was then employed as secretary to the president of First State Bank in Litchfield, MN, from 1942 to 1947. Ruby met her husband, Russell D. Haagenson from Paynesville, MN, at the roller-skating rink in Litchfield. They were united in marriage on November 30, 1947, at First Evangelical Lutheran Church in Cosmos, MN. They resided in Willmar, MN, for four years before moving to Fergus Falls in 1952. They had one son and two daughters. Ruby stayed home to raise their children until 1966 when she had the pleasure of working, for Dr. Ahmad Orandi, as a medical secretary for 24 years. She retired in 1990. Ruby was active in her church choir at Zion and Cosmos Churches. She was a Boy Scouts Den Mother with her son; and was a charter member and active in her GALS Homemakers Group from 1955-2015, at which time she moved to Brooklyn Park, MN, to be closer to her youngest daughter who helped care for her. Ruby enjoyed gardening, canning, camping, fishing, embroidery, traveling with friends, and jigsaw puzzles, until her vision no longer allowed her to participate in most activities. Preceding her in death were her parents; five siblings; husband, Russell; daughter, Karin Johnson, and son, Lynell Haagenson. Survivors include her daughter, LuAnn (Peter) Dehne of Brooklyn Park, MN; son-in-law, Steven C. Johnson of Fergus Falls; four grandchildren, Abby (John) Briles of Grosse Pointe Farms, MI, Tina Johnson of Golden Valley, Alyssa Dehne of Champlin, Kelsey Dehne of Brooklyn Park, and three great-grandchildren, Scarlett, Rosalie, and Emmett Briles of Grosse Pointe Farms, MI. Visitation: One hour prior to the service at the funeral home. Service: 3:30 p.m., Saturday, February 9, 2019 at Olson Funeral Home Chapel, Fergus Falls, MN Clergy: Reverend Ben Durbin Interment: Knollwood Memorial Gardens, Fergus Falls, MN Olson Funeral Home in Fergus Falls is in charge of the arrangements. Condolences may be sent online at www.olsonfuneralhome.com

The family of Ruby Lenora Haagenson created this Life Tributes page to make it easy to share your memories.