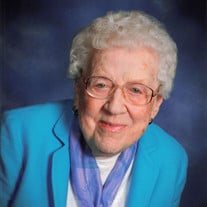 Roselyn Ingeborg Holte, 99, of Fergus Falls, died Monday, April 20, 2020, at PioneerCare in Fergus Falls. Roselyn was born January 20, 1921, in rural Sverdrup Township, Ottertail County to Peder and Alma (Linnerud) Holte. Her first years were lived on farms and three years in Duluth, moving to Battle Lake in 1928. She attended Battle Lake public schools, graduating from Battle Lake High School in 1939. She was confirmed in her faith at First Lutheran Church, where she taught Sunday school and sang in the choir. Graduating from Moorhead State Teachers College, she taught elementary grades in District 33, Vining, Norcross, and Hendrum, all in Minnesota. Following those years, she attended the Lutheran Bible Institute, Minneapolis, to prepare for Christian service and after graduating was employed there for three years. In 1952, called by her Lord and by the Board of Foreign Missions of the Lutheran Free Church, she entered missionary service in Japan, serving under the LFC, the ALC, and the ELCA. Returning to the US in 1968 to care for her mother, employed by Zion Lutheran Church in Fergus Falls. Further study was done in 1981 at the Seattle Lutheran Bible Institute and then worked for 12 years at Contextual Education Department at Luther Northwestern (now Luther) Seminary, St. Paul. Roselyn’s greatest joy and support in life was her Lord, Jesus Christ; her family brought much joy and support also. Music was always an important part of her life, enjoying piano and singing. She also enjoyed reading and traveling. Twice she visited Norway to see her father’s home and also revisited Japan after retiring. She kept in close touch with family members and relatives as well as many friends in the US, Canada, Japan, and Norway. She was the family historian, supplying information and remembering special occasions. This was her hobby and joy. Preceding her in death were her parents; brothers and sisters-in-law, Ralph (Dorothy), Philip (Marian), and Astor “Pete”; niece, Jan, and nephews, Ross and Steve. Roselyn is survived by a sister-in-law, Ardelle of Fergus Falls; nephews, Tim of Scandia, David (Ellen) of Brainerd, Daniel (Sue) of West Fargo, Mark (Julie) and Chris both of Fergus Falls; niece, Sandra (Kim) of Moorhead, as well as many grandnieces and nephews, other relatives and a host of friends. Memorials are preferred to Mount Carmel Ministries in Alexandria or Zion Lutheran Church in Fergus Falls. A private service will be held with Reverend David Holte. The burial will be at First Lutheran Cemetery in Battle Lake with Reverend Christopher Eldredge. Arrangements are provided by the Olson Funeral Home in Fergus Falls. Online condolences may be sent to www.olsonfuneralhome.com

The family of Roselyn Holte created this Life Tributes page to make it easy to share your memories.