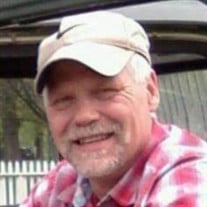 Ronald “Ron” Synstelien, 62, of Fergus Falls, died Friday, December 4, 2020, at Lake Region Healthcare in Fergus Falls. No one took his life…not even Covid. His life was hidden in Christ when he was 12 years old, praying at the altar, surrendering his life to Jesus. He was not only willing to die for his faith, but to live every day dying to himself. Although Ron’s earthly life unexpectedly ended in a physical battle with Covid-19 virus and pneumonia, he had given his life away decades before – he would tell you that it was no longer he who lived, but Christ. He belonged to God. Ronald Allen Synstelien was born September 19th, 1958, the eighth child of Arthur and Rosella (Johnson) Synstelien. He was a sweet little, sky-blue-eyed, tow-headed boy who grew up fiercely devoted to his mother and a hard-working helper to his dad. After graduating from Ashby High School in 1977, he attended Bible School in Bradenton, Florida, and was baptized in the Manatee River. He loved the Word of God. He married his best friend and childhood sweetheart, Dawn (Thompson) on September 29, 1979. The young couple spent their early years alternately living near their families in the Ashby area, and prayerfully following the leading of the Holy Spirit to pursue ministry and educational opportunities from Florida, to Missouri, to Pennsylvania. Whatever dreams they followed, they did in partnership, seeking to be useful and a blessing, collecting friends everywhere they went. Ron’s vocation always involved building and restoring. In some seasons, he focused on building the Kingdom of God as a pastor in various churches. In other seasons, he built family and community through his work in foster care and group home settings, as well as by utilizing his training in biblical counseling. And through all seasons, he labored as an artist: building and renovating homes and furniture and their yard, restoring beauty to forgotten antiques; allowing people to cherish the memories they evoked. Restoration was a way of life for him and he liked to leave things better than he found them. But above all of this, Ron wholeheartedly lived out his calling of husband and father. Because he worked from home much of their married life, he and Dawn truly “job-shared” in all domestic areas. Ron changed diapers, rocked babies in the middle of long newborn nights, and was quick to pitch in for meal clean-up. He was a family man through and through. As his children grew, so did their friendship with their dad – his counsel was their go-to for all things, practical or spiritual. He delighted in the adults they became and the subsequent addition of each “grand” brought him such joy. He loved having the house full of family and enjoyed gatherings with his large extended family as well. Ron was quietly servant-minded towards all, not only those under his roof or within his church family. He wanted to shine the light of Christ wherever he went, in his humble, soothing and quiet way. He befriended the lonely or downcast, not put off by outward appearances or attitudes. He was patient and kind in his approach to others, alert to their deeper needs. He had a habit of slowing down, looking people in the eye and, rather than take offense at rudeness, asking, “Are you okay?” This was possible because Ron lived from an awareness of God’s undeserved grace. Thankfulness spurred him on to extend his kindness to those around him. It was truly the hallmark of his life; to glorify God and love others as Christ had loved him. As his wife and children surrounded his bedside on the morning of December 4th, they sang softly to him. outside the hospital, friends had gathered in the parking lot to worship and pray. Ron took his las breath on this side of the veil before crossing over into the loving arms of his Savior who whispered, “Well done, my good and faithful servant…” and wiped the last tears from Ron’s eyes. One steady and unbroken string of praise twined from this world to the next. Loved ones who remain and await heavenly reunion include: Ron’s wife, Dawn; his children Kimberly (Peter) Draxten, Amy (Ryan) Garvin, Michael, Stephanie (Nick) Swedberg, and Victoria; his beloved grands, Cohen, Sawyer, Julia and Jace Draxten, Paisley, Veda, Waverly and Zinnia Garvin, Blake and Bella Synstelien, and Aiden, Declan and Elaina Swedberg; his brothers, Stanley (Karen), Gerald (Joy), Steven, Daryl (Linda) and Randy (Carma) Synstelien; sisters, Marlys (Timothy) Hamilton and Nancy (David) Jaecklein and sister-in-law, Darlene; his father and mother-in-law, Alden and Winnie Thompson; and like little sisters to him their daughters, Renee (Stephan) Granzow and Kathleen (Steve) Tschacher; as well as numerous nieces, nephews, aunts, uncles, cousins, friends and colleagues. Welcoming him to his eternal home were his parents, sister and brother-in-law Janice and Michael Shelling, and his brother Loren and sister-in-law Deneise. Blessed be the name of the Lord. Memorials are preferred to Health Resources Center, in honor of Ron’s advocacy for life and family. Health Resources 126 E. Lincoln, Fergus Falls, MN 56537 Visitation: 10:30 a.m. Saturday, February 6, 2021 at Life Church in Fergus Falls Service: 11:00 a.m. Saturday, February 6, 2021 at Life Church in Fergus Falls. Please refer back to Ron’s Tribute Wall for a link to the Live-stream of the service. Clergy: Pastor Clay Mitchell Interment: Pelican Lake Cemetery, Ashby, MN Arrangements are provided by the Olson Funeral Home in Fergus Falls. Online condolences may be sent to www.olsonfuneralhome.com

The family of Ronald "Ron" Synstelien created this Life Tributes page to make it easy to share your memories.