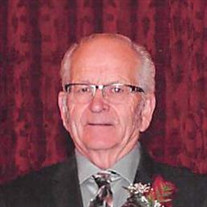 Ronald (Ron) James Peterson, 79, formerly a resident of Dent, died on Tuesday December 3, 2019, at Sanford Care in Fargo, ND. Ron was born November 26, 1940, at home to Harold and Sadie Peterson. He grew up on the family farm and attended country school in his early years. He graduated from Perham High School and after graduation; he worked as a meat cutter for Carl Spieces. Ron was united in marriage with Carol (nee Hanson) on December 2, 1961. Their union was blessed with 54 years of marriage, two children, nine grandchildren, and eight great-grandchildren. He and Carol purchased and worked her parents’ farm beginning in 1978. He was a fulltime farmer while working other positions including Service Food, Steiger Tractor, and at the end of his career Larry’s Super Value. After retiring from farming, he was a supervisor on the Star Lake Township board and was a crew leader for Greenway at the Frazee rest area. Ron was preceded in death by his parents Harold and Sadie and brothers, Orville and Paul. He was a care provider for his wife Carol for many years prior to her death in 2016. After the passing of his wife Carol in 2016, he met his love, Joyce Bunnell, whom he married on December 16, 2017. He then moved to Fergus Falls. Ron had a deep faith and love for his family, friends, and the community. He would help others when needed. He was a skilled woodworker and could repair anything. Along with making wood projects, he used his skills to help others and enrich their lives. Ron was actively involved with church, the community, and other associations to provide for others. He greatly enjoyed traveling with Joyce and participated in committees to support the community. He was a volunteer with his church, Habitat for Humanity, and The Welcome House. Ronald is survived by his wife, Joyce of Fergus Falls; son, James (Sue) Peterson of Fergus Falls; daughter, Catherine (David) Vague of Faribault; step-children, Dana Williams of Fort Myers, FL, Jake (Anna) Williams, Spokane Valley, WA, and Scott (Kristin) Williams, Sun Prairie, WI; nine grandchildren, eight great-grandchildren, and numerous aunts, uncles, cousins, and friends. In loving memory of Ronald Peterson, a soldier of support to others. Memorials are preferred to Habitat for Humanity. Visitation: Monday, December 9, 2019, from 5:00 to 7:00 p.m., with a prayer service at 6:30 p.m. at the Olson Funeral Home in Fergus Falls. Visitation will resume one-hour prior to serv ice at the church. Service: Tuesday, December 10, 2019 at 11:00 a.m. at Bethlehem Lutheran Church in Fergus Falls. Clergy: Reverend Tom Peterson Interment: Pleasant Hill Cemetery near Dent, MN Arrangements are provided by the Olson Funeral Home in Fergus Falls. Online condolences may be sent to www.olsonfuneralhome.com

Ronald (Ron) James Peterson, 79, formerly a resident of Dent, died on Tuesday December 3, 2019, at Sanford Care in Fargo, ND. Ron was born November 26, 1940, at home to Harold and Sadie Peterson. He grew up on the family farm and attended country... View Obituary & Service Information

The family of Ronald James Peterson created this Life Tributes page to make it easy to share your memories.