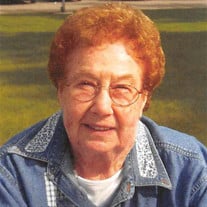 Romayne Gertrude Harrington, 94, a resident of rural Underwood, passed away peacefully Wednesday, November 21, 2018, at the Good Samaritan Society in Battle Lake. Romayne was born on May 20, 1924, in Underwood the daughter of Henry W. and Sena (Bjornstad) Hanson. She was baptized and confirmed at the Tingvold Lutheran Church in rural Underwood. She had fond memories of attending grade school at the rural Barnhard School located only a mile from where her parents lived and farmed on the north side of Anna Lake. Romayne shared that one of the country school’s favorite cheers was, “Skinny Minneapolis, fat St. Paul, Barnhard School can beat them all.” She often reminisced about family and neighborhood celebrations on Lake Anna’s Sheep Island that usually involved swimming, singing, and always too much food. During her early high school years her family moved to Maine Township where they purchased farm property along Pember Lake. While attending high school in Underwood, she also had a part time job in Maine as telephone operator. Following her high school days, she became the township’s primary telephone operator but only for a few months. Romayne had an adventurous side and, along with a woman who ran the Dent telephone office, decided to take a train to Chicago to visit Romayne’s older sister and to seek work in the “windy city”. Romayne worked for the Kresge Variety Store chain in Chicago for only a short time before WW2 broke out. She returned to the Twin Cities area and joined the war effort by assembling parts for combat gliders at Northwest Aeronomics. Following the war, she continued to work for the company but returned most weekends to Maine Township to help on her parents’ farm. While home one weekend, Romayne met Bruce Harrington, who had recently returned from Army duty in Europe and was working road construction projects in Maine. They were married on November 5, 1946, at Tingvold Lutheran church. They were married for 59 years before Bruce died in November 2005. Romayne was a devoted mother to her four children while also supporting Bruce’s trucking company that was home-based in Maine. In 1968 she began a 21-year employment at the Fergus Falls State Hospital working in the food services department, retiring in 1989. She was a fantastic cook and baker who enjoyed preparing meals for her family, the men working for Harrington Trucking, and all friends and neighbors who happened to stop in. She planted and maintained an annual garden that seemed to expand in size each year, which resulted in canning and freezing wonderful produce. She found great pleasure in raising and picking strawberries. She was an avid bird watcher and kept the feeders filled year round. Romayne loved poetry and singing. Before and after retirement, she was a committed and faithful caregiver for local aunts and uncles while also finding time to be a 4-H leader and Ladies Aid member at both Tingvold and Stavanger Lutheran churches. Preceding her in death were her husband, Bruce; her special friend, Dell Neu; parents, Henry and Sena Hanson; parents-in-law, Dewey and Daisy Miller; great-grandson, Aksel Birch; sister, Harriet (Rick) Rechtermann; and brothers-in-law and sisters-in-law, Wynne “Chick” Arnold, Joe Lazzaro, Rick Rechtermann, Arlene Jensen, Darrel Miller, Clem and Joanne Miller, and Dale Miller. Survivors include her children, Gary (Karalyn) Harrington of Battle Lake, Gail Joseph of Minnetrista, Jean (Dave Moore) Tenneson of Fergus Falls and Kevin Harrington of Lincoln, NE; grandchildren, Mark (Kelly) Harrington, Stacy (Aaron) Birch, Chad Harrington, Sarah (Jesse) Faul, Tressa Tenneson, Shelby Harrington, and Mitchell Harrington; great-grandchildren, Nathanial Verduzco, Camden Harrington, Bryson, Paisley, and Thayne Birch, and Tryston, Mady, and Owen Faul; sisters, Violet Lazzaro and Audrey Arnold, and brothers-in-law and sisters-in-law, Stan Jensen, Rollis and Luella Miller, Harold and Betty Miller and Doris Miller, along with numerous nieces and nephews. Romayne’s family would like to express a special thank you to the Good Samaritan Society in Battle Lake for the wonderful care and attention she received while a resident in their facility for over four years. Visitation: 5-7 p.m., Monday, November 26, 2018, at the funeral home Service: 11 a.m. Tuesday, November 27, 2018, at the Olson Funeral Home, Fergus Falls Clergy: Reverend John Juhl Interment: Tonseth Cemetery, rural Erhard Olson Funeral Home, Fergus Falls is in charge of arrangements online condolences may be sent to www.olsonfuneralhome.com

Romayne Gertrude Harrington, 94, a resident of rural Underwood, passed away peacefully Wednesday, November 21, 2018, at the Good Samaritan Society in Battle Lake. Romayne was born on May 20, 1924, in Underwood the daughter of Henry W. and Sena... View Obituary & Service Information

The family of Romayne G Harrington created this Life Tributes page to make it easy to share your memories.