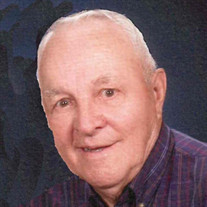 Rollis “Rod” Mervin Miller, 90, of Fergus Falls, MN died, Friday, April 2, 2021 at Lake Region Healthcare. Rollis was born on August 15, 1930, to Dewey and Daisy (Bugbee) Miller in Erhard, MN. On June 16, 1951, Rollis was united in marriage to Luella Tysdal at Zion Lutheran Church in Fergus Falls, MN. Their marriage was a testament of true love and devotion. Rollis was employed at Park Region Bakery from 1948 – 1951. He then joined the National Guard 47th Infantry of the US Army at Fort Rucker, Alabama and was discharged in 1953. He returned to work at Park Region Bakery until 1965. Between 1965 – 1982, he worked at Tysdal Implement and then became co-owner of Tysdal/Miller Implement. In 1982 he sold his ownership and started Miller’s Bobcat, which he owned and operated until he retired in 1999. He was a member of the America Legion and of the Otter Tail County Sheriff’s Posse. He was actively involved with his church Zion Lutheran, when his health allowed. Rod enjoyed gardening and flowers, just liked his Mother had. He really loved hunting and fishing, and always enjoyed betting a quarter on the first fish, of course with that half joking big smile on his face. Through the many successful years of fishing, he was blessed with an abundance of quarters that still reside in his tacklebox. He loved to go for a drive and watch the leaves changing color, and of course he loved spending as much time as he could with family and friends. He was so entertaining when he shared his hunting and fishing adventures, and everyone loved to hear them. He is preceded in death by his parents, Dewey and Daisy; four brothers, Bruce Harrington, Dale, Darrel, and Clarence Miller; and sister, Arlene Jensen. Rollis is survived by his loving wife of almost 70 years, Luella of Fergus Falls; four children, Ricky (Donna) Miller of Buena Vista, CO, Linda (Jim) Trupka of Moorhead, MN, Linnae Slattery of Martin, SD, and Lynette (Marty) Ringquist of Fergus Fall, MN; eight grandchildren, Casey (Carl) Winterbower of Grand Junction, CO, Kristi Strum of Bellevue, NE, Abbey (Ryan) Winterbower of Portland, WA, Michael (Angela) Trupka of Fargo, ND, John Paul (Kaytlyn) of Severance, CO, Melissa (Lonny) Lesmeister of Martin, SD, Megan Slattery of Valentine, NE, and Allison Ringquist Osakis, MN;eight great grandchildren, Taylor and Chase Strum, Verity and Enzo Winterbower, Aria and Gavin Trupka, and Kase and Krew Lesmeister; brother, Harold (Betty) Miller; sister-in-law, Doris Miller and brother-in-law, LeRoy Tysdal. A private immediate family service will be held now, with a Celebration of Rod’s Life on Saturday, June 19, 2021, 11:00 a.m. - 2:00 p.m. at Tonseth Lutheran Church, Erhard, MN Please refer back to Rollis's tribute wall for a recording of the service. Clergy: Reverend Chris Eldredge Interment: Tonseth Lutheran Church Cemetery, Erhard, MN Arrangements are provided by the Olson Funeral Home in Fergus Falls. Online condolences may be sent to www.olsonfuneralhome.com

The family of Rollis "Rod" M. Miller created this Life Tributes page to make it easy to share your memories.