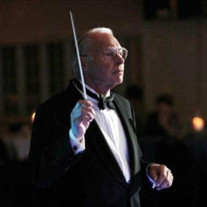 Rollin Oliver Glaser, Ed.D., 87, of Raleigh, North Carolina, died peacefully in his home of congestive heart failure on July 1, 2020. Rollin was born December 16, 1932 in Chicago, Illinois, the only child of William A. Glaser and Oraline Hillseth. From his earliest years he expressed a love of music, particularly Benny Goodman and the big band era. Over his lifetime he studied and played Classical, Swing, Dixieland, and Jazz music, even developing a Jazz improv technique and teaching it to others in his 80s. His first love was the clarinet, and he also played the sax. He formed his first band, The Blue Notes, in his teens, and went on to lead and play in numerous bands to the delight of many in the Raleigh area in the last 10+ years, including the Blue Notes Dixieland Jazz Band, Tune Swingers Orchestra, and High Society Orchestra. Rollin began his career as an English teacher, moving into insurance, and then into retail personnel management, where he discovered a passion for helping adults self-actualize through their work, thereby enriching corporate cultures and the lives of those within them. At heart, Rollin was an entrepreneur. He started a business, now known as HRDQ, in 1977 with his then wife Christine. Their groundbreaking work in experiential learning was on the leading edge of a massive paradigm shift in corporate training and development during the 1970s and 80s. Rollin was a graduate of Northwestern University, with Masters degrees from Northeastern University and Columbia University, and a Doctoral degree in Adult Education, also from Columbia. He served in the US Army from 1955-1957. He is survived by his two children, Zara Shea (Asheville, NC) and Bradford Glaser (Downingtown, PA); his 5 grandchildren; his former wife, Christine Glaser (Asheville, NC); and his wife, Deborah Brown Glaser (Franklinton, NC). Rollin was predeceased by his wife Barbara Allison (d. 1956) and his wife Janet Allison (d. 2016). He also enjoyed a close relationship with Janet’s 3 grandchildren. Rollin will be laid to rest in Fergus Falls, Minnesota. A Celebration of Life service and reception will be held in Raleigh at a future date. The family has requested that no flowers be sent and will provide details shortly for donations in Rollin’s memory.

Rollin Oliver Glaser, Ed.D., 87, of Raleigh, North Carolina, died peacefully in his home of congestive heart failure on July 1, 2020. Rollin was born December 16, 1932 in Chicago, Illinois, the only child of William A. Glaser and Oraline Hillseth.... View Obituary & Service Information

The family of Rollin Oliver Glaser, Ed. D created this Life Tributes page to make it easy to share your memories.