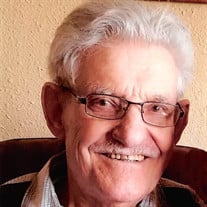 Roland Earl Kenyon, 98, of Fergus Falls, died Sunday July 14, 2019, at the MN Veterans Home, in Fergus Falls. Roland was born on March 22, 1921in Friberg Township, to Glen E. and Etta (Dominick) Kenyon. He grew up on the farm and attended country School District 229. He worked as a Farm Hand and later in construction in the Fergus Falls area until 1942. In September of 1942, he enlisted in the US Navy, starting his service in Norfolk, VA aboard the USS Essex Air Craft Carrier; serving in the South Pacific on the Seventh Fleet. The USS Essex was bombed by the Kamikaze plane while in the Pacific, killing 19 men on deck, Rollie survived. He spent 6 months in dry dock for ship repairs. In 1942, he transferred to the USS Hancock. After being discharged on January 6, 1946, he returned to Minneapolis and worked for the railroad. On March 16, 1946, he married Lorna Nelson in Minneapolis, residing there until June when they returned to the Fergus Falls area, where he continued farming. In 1950, they bought a farm in Friberg Township. In addition to farming, he worked for Anderson Brothers Construction, retiring from construction in 1982. His wife, Lorna, died January 11, 1990. On October 18, 1993, he married Evelyn Horton, residing in Fergus Falls. Roland loved hunting and fishing, especially deer hunting. He enjoyed traveling, watching baseball, gardening flowers and shrubs. He was a member of the Fergus Falls VFW, Tonseth Lutheran Church, and the Eagles. He is preceded in death by his parents; a daughter, Debra; a son-in-law, Les Langren; two step-sons, Gary and Steve Horton; two sisters, Belle Kniss and Yolanda Kubitz, and nine brothers, Keith as an infant, Dell, Maurice, Harvey, Neil, John, Jesse, Ross, and Quentin. Roland is survived by his wife, Evelyn; children, Virginia Langren of Coon Rapids and Kathryn (Ron) Christian of LeCenter; step-children, Cindy Horton of Fergus Falls and Roger (Sharon) Horton of Chippewa Falls, WI; along with numerous nieces, nephews, grandchildren and great-grandchildren. Visitation: One hour prior to service at the funeral home. Memorial Service: 11:00 a.m. Saturday, July 27, 2019 at Olson Funeral Home Chapel, Fergus Falls, MN. Clergy: John Westby Interment: Tonseth Cemetery, rural Erhard, MN Military Participation by the Fergus Falls VFW Post #612 and the Fergus Falls American Legion Post #30 Arrangements provided by the Olson Funeral Home in Fergus Falls, MN. Condolences may be sent to www.OlsonFuneralHome.com

Roland Earl Kenyon, 98, of Fergus Falls, died Sunday July 14, 2019, at the MN Veterans Home, in Fergus Falls. Roland was born on March 22, 1921in Friberg Township, to Glen E. and Etta (Dominick) Kenyon. He grew up on the farm and attended country... View Obituary & Service Information

The family of Roland Earl Kenyon created this Life Tributes page to make it easy to share your memories.