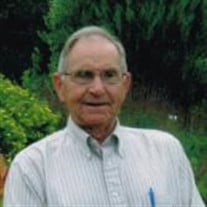 Roger Alden Pederson, 86, a resident of Fergus Falls died Friday, March 16, 2018, at his home. He was born on September 14, 1931, in Fergus Falls, to Henry S. and Nettie (Forde) Pederson. Roger grew up on the family farm and attended school in Buse Township. He was baptized and confirmed at the First Lutheran Church. He joined the United States Army in 1951, stationed in Germany as a tank turret mechanic, as well as other jobs associated with maintaining a tank, from 1952-1954 during the Korean War. He returned home and on June 12, 1954, he married his high school sweetheart, Bonita Joy Martinson. Together they had 3 children; Barbara, Darcy and Craig. Roger and Bonnie celebrated 40 years of marriage before Bonnie died in 1994. The couple lived on the farm south of Fergus Falls, where Roger and his brother Don farmed and milked cows until 1989. Farming was his passion, working long hours during harvest. Bonnie always said that she wouldn’t start supper until “she saw the whites of his eyes”. After he retired from farming, he went to work at Ottertail Glass, installing and repairing windows in homes and businesses throughout the area. He worked there through the change of owners, “retiring” at age 80. Roger was a member of the First United Church of Christ, where he and Bonnie were married. He sang in the church choir, was an usher and served on the church council as well as other numerous committees. He was a hard worker even through this last year at the annual Pig Roast hosted by the church. He was a lifetime member of VFW Post 612, serving as a member of the Color Guard. Roger was dedicated to putting up and taking down the flags during the Veterans Walk of Flags events in Fergus Falls. Roger loved working with his hands, building bird houses and benches, and he faithfully fed the birds he enjoyed watching. He enjoyed fishing and hunting with his sons-in-law who he called his “best friends”. Roger liked to keep up with news, reading 2 to 3 newspapers daily. Each visit with his daughters and son ended with a hug, kiss and “I love you”. Most recently he added “I am so lucky to have you”. Roger was proud of each of his grandchildren, who loved spending time with him as he always made them laugh. And also, proud to be a Great-Grandpa to the little ones who called him “Old Papa”. He was a true family man! Preceding him in death were his parents; wife, Bonnie; brother, LeRoy Pederson; sister, Evelyn Gerlach; his sons-in-law, Darwin Forkrud, Craig Godel; and a granddaughter, Erin Joy Tabbut. He is survived by his children, Barbara Godel of Mapleton, ND, Darcy Forkrud of Willmar, MN, Craig of West Fargo, ND; five grandchildren, Carly Bosworth, Ashley (Dan) Sawyer, Cody (Jessica) Godel, Austin Marts, and Hannah Forkrud; four great-grandchildren, Allison Bosworth, Jaxon and Charlotte Godel and Oliver Forkrud; his brother, Donald (Helen) Pederson, sister, Phyllis (Chuck) Green and sister-in-law, Delores Aune; as well as numerous nieces, nephews and friends. Visitation: 5-7 p.m. Tuesday, March 20, 2018, at Olson Funeral Home in Fergus Falls, MN, and resumes one hour prior to the service at the church Service: 11 a.m. Wednesday, March 21, 2018, at Living Faith Church, Fergus Falls, MN Clergy: Pastor John Kilde Interment: First United Church of Christ Cemetery, Fergus Falls, MN Arrangements are provided by the Olson Funeral Home in Fergus Falls Online condolences may be sent to www.OlsonFuneralHome.com

Roger Alden Pederson, 86, a resident of Fergus Falls died Friday, March 16, 2018, at his home. He was born on September 14, 1931, in Fergus Falls, to Henry S. and Nettie (Forde) Pederson. Roger grew up on the family farm and attended school... View Obituary & Service Information

The family of Roger A. Pederson created this Life Tributes page to make it easy to share your memories.