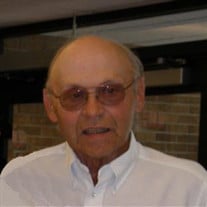 Roger Allen Lehn, a resident of Erhard, MN, died Tuesday, March 27, 2018, at Sanford-West Hospital in Fargo, ND, at the age of 79 with his loving family by his side. He was born at home November 27, 1938, in Erhards Grove Township to Peter and Gladys (Melkert) Lehn. Roger was baptized and continued to be a parishioner at St. Elizabeth for almost all of his life. He was about 14, when he began serving at the Men’s Pancake Dinner and never missed serving until the last two dinners, because of his health. He attended Erhard School District 278 until ninth grade when he started high school in Pelican Rapids, graduating in 1956. After graduation he was employed by Montana Milling Co. (ConAgra) and received further company education to be head laboratory chemist. In 1970, he and his father started a dairy and grain farming partnership. In 2000, the dairy cattle were sold and Roger retired, making the cold days finding him looking out the patio door and saying “Sure glad we don’t have to go out in this cold and milk”. Retirement became very boring, so he went back to work, this time doing manufacturing at StoneL (Metso). He spent over ten years employed by them and decided it was time to retire again. He still continued to do grain farming and was wanting to plant his crops again this year. They will get planted, but by the fifth generations of Lehns, his sons. Roger and Janice (Bergquist) Lehn were married at St. Joseph Catholic Church, Foxhome, by The Rev. Thomas Coleman, October 10, 1959, celebrating 58 years of marriage. To their union, four children were born, Timothy Allen Lehn, 15, deceased Feb. 3, 1977, Thomas Lehn, Erhard; Colleen Pechia, Cambridge, MN; and Rodney Lehn, Pelican Rapids. He was a Grampa to six granddaughters, 14 great-granddaughters, and 2 great-grandsons. Roger was a very avid history reader. Although, any book subject could be very interesting and find him reading very, very late many nights. He has instilled reading into the grandchildren and great-grandchildren and was never too busy to take time to read or listen to the “little ones” when they began reading. Roger was the most patient, honest and trustworthy father, grandfather and great-grandfather. The past year his health began declining, but he needed another outlet besides reading, so he began baking cookies for the girls, batches of them every week. If he wasn’t baking, cookies or homemade bread, he was trying to find a different recipe for the next session. He also helped prepare the homemade vegetable soup, one of his most favorite foods. During his younger years he never missed deer hunting or a good fishing trip. He, brothers, kids and anyone who was available, made very good deer sausage every year. He also began making his own beef sausage and smoking the sausage when he couldn’t go hunting anymore. Roger was also preceded in death by his parents, brothers Charles (Butch) and David and two sisters, Margaret (Peggy) and Elizabeth Craig and her husband Norman; brother-in-law, Lester Ouren; father-in-law, Joseph Bergquist; and numerous aunts and uncles. Roger is also survived by two sisters, Patricia (Lester) Ouren of Erhard and Carol Hodnefield (Melvin) of Vergas, one brother, Ronald of Akeley, MN, and his mother-in-law, Myrtle Bergquist of Fergus Falls; sisters-in-law, Jean Lehn and Candice Bergquist; as well as nieces, nephews, and cousins. Visitation: 5-7 p.m. Friday March 30, 2018, at Brenny Hall in Elizabeth, with a 6:30 p.m. public prayer service, and resumes one hour prior to the service at the church Mass of Christian Burial: 11 a.m. Saturday, March 31, 2018, at St. Elizabeth Catholic Church in Elizabeth, MN Clergy: Father Jeff Ethen Interment: St. Elizabeth Cemetery, Elizabeth, MN Arrangements are provided by the Olson Funeral Home in Fergus Falls Online condolences may be sent to www.OlsonFuneralHome.com

Roger Allen Lehn, a resident of Erhard, MN, died Tuesday, March 27, 2018, at Sanford-West Hospital in Fargo, ND, at the age of 79 with his loving family by his side. He was born at home November 27, 1938, in Erhards Grove Township to Peter... View Obituary & Service Information

The family of Roger Allen Lehn created this Life Tributes page to make it easy to share your memories.