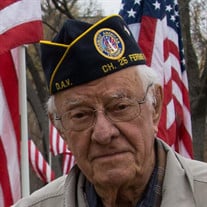 Rodney Sylvan Ebersviller, age 94, of Fergus Falls, passed away peacefully July 25, 2019, at Good Samaritan Society, Battle Lake. Rod was born in Pelican Rapids, MN on October 8, 1924, to Alwine (Fick) and William Ebersviller. He was one of 5 children: Lorraine, Gordon, William, Rodney, and Catherine. He graduated from Fergus Falls High School in 1942, and entered the army in 1943. On his way to basic training, Rod met the love of his life, Barbara (Bobbie) Hansen, on the train “Spirit of St Louis” and they kept in touch during the war. Army Staff Sgt. Ebersviller’s machine gun squad was outflanked by a German tank squadron just prior to the start of the Battle of the Bulge. He was wounded and captured in December 1944. He spent the remainder of the war in a German hospital and in several POW camps. He was discharged in 1945 and received a Purple Heart. When Rod returned home, he reconnected with Bobbie at the University of Minnesota. They were married in 1948 and Rod graduated in 1949. Rod & Bobbie moved to Rothsay in 1950, where for 14 years he ran Rothsay Implement (John Deere). He was active with local businesses, served on the school board, was a volunteer firefighter, and led a squad of local veterans in 4th of July parades for many years. Rod & Bobbie raised four children in Rothsay, and in 1971 the family moved to Fergus Falls. Rod, with his father and brothers Gordy and Bill, owned and managed Ebersviller Implement. Rod sold the John Deere business and retired in 1982. Through Rod’s interest & research in Genealogy he found that his grandfather was born in a town in France near where he was interned in WWII. This was one of the many areas they were able to visit in retirement. They also traveled to Peru, China, Egypt, Indonesia, Russia, and throughout the rest of Europe. One of Rod's favorite places was the cabin on Crystal Lake that has been in his family since 1940. He enjoyed many sunset cruises on the pontoon with family. In 2003 Rod & Bobbie treated four generations to a week-long trip to California, and in 2005 the couple was included in one of the earliest Honor Flights to the Veterans Memorial in DC. Rod was very active in local veteran and business groups in Fergus Falls. Organizations included DAV, Rotary, Ducks Unlimited, Toastmasters, Otter Tail County Historical Society, Y’s Folks, reading for the blind, and weekly bible study/discussion groups. He was an avid reader (over 40,000 books during his lifetime), hunter & fisherman who truly lived with gratitude. On March 19, 2012, which would have been their 64th wedding anniversary, Rod said good-bye to his beloved Bobbie. He is survived by his four children, Todd (Mary), Ann (Marv) Pederson, Jon (Teresa), and Jane; seven grandchildren; 11 great grandchildren (soon to be 12); sister-in-law Nancy Ebersviller; many nephews, nieces, cousins, and countless good friends. His family would like to thank the wonderful staff at New Dimensions, Mill Street, LB Hospice, Battle Lake Good Samaritan, as well as many, many good friends for taking care of our Dad. Visitation will be held Sunday, August 4, from 2-4pm at Olson’s Funeral Home in Fergus Falls, with a Time of Remembrance at 3:30pm. Services will be at First Lutheran Church, on Monday, August 5, 2019 at 11am. Clergy: Reverend Gretchen Enoch Burial with Military Honors by the Fergus Falls VFW Post #612 and the American Legion Post #30, will follow at Oak Grove Cemetery. Memorials donated in Rod’s memory will be gifted to the DAV, First Lutheran Church, and other favorite charities. Arrangements are provided by the Olson Funeral Home, Fergus Falls Condolences may be sent online at www.olsonfuneralhome.com

Rodney Sylvan Ebersviller, age 94, of Fergus Falls, passed away peacefully July 25, 2019, at Good Samaritan Society, Battle Lake. Rod was born in Pelican Rapids, MN on October 8, 1924, to Alwine (Fick) and William Ebersviller. He was one of... View Obituary & Service Information

The family of Rodney Sylvan Ebersviller created this Life Tributes page to make it easy to share your memories.