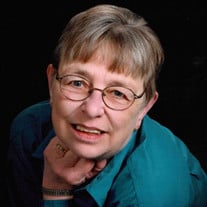 Robyn Elaine Beckman, 65, of Fergus Falls, died November 27, 2018 at her home. Robyn was born to Robert Andrews and Y. Jean (Raffety) Ouren in Seattle, WA, on August 29, 1953. She started school in Seattle and in 1966 her family moved to Underwood where she attended school and graduated in 1971. After high school she worked at DB Rosenblatts in Fergus Falls. On October 14, 1972, she was united in marriage to Steven Beckman at Sverdrup Lutheran Church in Underwood. They started dairy farming with Warren and Marlys, later joined by Paul and Dianne. In the spring of 1987, she and Steve started working for Jennie-O Foods on the Lone Pine Turkey Farm by Wall Lake. They moved to Big Valley Turkey Farm in 1992 where they resided at the time of her death. Robyn was a member of Sverdrup Lutheran Church. She baked dozens of cookies and was known as the “cookie lady” to many. At Christmas time, she loved to watch movies on the Hallmark Channel. She was a NASCAR fan, enjoyed fishing and in her younger years, bowling and playing softball. She is survived by her husband, Steven of Fergus Falls; daughters, Teresa (Neal) Correy of Vancouver, WA and Stacy (Tim) Hammes of Underwood; grandchildren, Branden Correy and Kaleb Hammes; father, Clifford Ouren of Fergus Falls; siblings, Wayne (Ann) Ouren of Seattle, WA, Lauri (Tim) Nelson of Fergus Falls and Randy (Lyn) Andrews of Henning; mother-in-law, Marlys Beckman of Underwood; numerous extended family and many friends. She was preceded in death by her parents; daughter, Brenda; niece, Amanda Nelson; brother, Mark Andrews; father-in-law, Warren Beckman; aunt, Mary Carey. In lieu of flowers memorials preferred to Sverdrup Cemetery Fund or organization of donor’s choice. Visitation: 4:00 – 7:00 p.m. Tuesday, December 4, 2018, at Olson Funeral Home in Fergus Falls and one hour prior to the service at the church. Service: 11:00 a.m. Wednesday, December 5, 2018, at Sverdrup Lutheran Church, Underwood Clergy: Reverend Martha Halls Interment: Sverdrup Cemetery, Underwood at a later date Arrangements provided by Olson Funeral Home in Fergus Falls Online condolences may be sent to www.OlsonFuneralHome.com

Robyn Elaine Beckman, 65, of Fergus Falls, died November 27, 2018 at her home. Robyn was born to Robert Andrews and Y. Jean (Raffety) Ouren in Seattle, WA, on August 29, 1953. She started school in Seattle and in 1966 her family moved to Underwood... View Obituary & Service Information

The family of Robyn Beckman created this Life Tributes page to make it easy to share your memories.